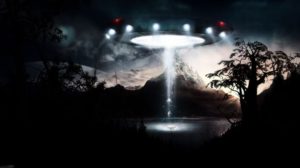 The unidentified flying object – better known by its abbreviation: UFO exists, simply because any light in the sky or unfamiliar object that cannot be explained is technically a UFO, but what most people have in mind when they speak of a UFO is a flying saucer, an alien craft, or perhaps an advanced gravity-defying top-secret stealth aircraft constructed by the military.

Unexplained aerial objects have been reported throughout history, going way back to the days of Ancient Egypt.

Today, UFOs are still being reported across the world and Knowsley is certainly no stranger to the baffling phenomenon.

In 1967, Knowsley and parts of Liverpool were visited by a wave of UFOs, and the first major – flap (UFO jargon for an unusually high concentration of sightings in a certain area within a brief period of time) took place in August at Huyton.

At 3 am one August morning in 1967, a 9-year-old child named Andrea was awakened from her sleep by a weird humming sound. Andrea went and woke her mum up and, and the girl’s mother realized the sound was coming from outside.

She pulled back the curtains and saw a glowing green object hovering at the rooftop level. Andrea’s mother later described the UFO in a newspaper article as resembling a humming top.

The strange craft flashed away into the night at such a speed, the Huytonian woman could not follow it with her eyes.

That same morning at three, a 50-year-old man at a house on Huyton’s Essex Road, got out of bed to go to the toilet when he happened to glance out the window.

The man was startled to see a huge circular object hovering over Whiston Lane. It gave off a greenish glow and emitted a humming sound for about ten seconds before it zoomed north towards Huyton Lane.

More strange objects were seen over Knowsley and Liverpool in the following months, including a UFO described by Liverpool Echo as a – plate in the sky – that was seen on the Thursday night of 26 October 1967.

This flying saucer made front page headlines after it was seen by dozens of witnesses whizzing over Croxteth Hall Lane and Norris Green.

Peter Murphy, a 35-year-old garage manager from Kirkby, had been driving along Croxteth Hall Lane at 11.25pm when he saw a shining object flash across the road and land in a field near to Oak Lane.

Mr Murphy reported the matter to the police and went to the field with them, and while they were there they all saw a bright white light with a blue aura hovering in mid-air.

The light fell and vanished, and minutes later, over a mile away, Mr. Murphy and the police saw the same object hovering over the East Lancs Road.

I have a collection of local UFO reports thicker than a telephone directory, and one report really stands out because it seems to have been witnessed by a sizeable percentage of Merseysiders.

On the Saturday morning of 24 February 1979 at 2.45am, the people of Southport, Scarisbrick, Ormskirk, Maghull, Crosby, Kirkby, Formby, Bootle and Aintree were startled out of their slumbers by a terrific bang, followed by a bright flash.

People got out of bed and peered with bleary eyes at the sight of a huge orange fireball moving across the black moonless skies at a phenomenal speed.

Residents at Hurlston Hall caravan site in Scarisbrick looked up in terror and saw the giant fireball fly straight across the sky before changing course – as if it was being controlled.

When the fireball passed over northern Liverpool and Knowsley, people saw shafts of light radiate from the object, and it swooped to rooftop level.

A taxi driver in Walton said it passed over his vehicle and he immediately lost all power in the cab, and this nullifying influence of the UFO was reported again and again that morning from other motorists who had come close to the strange sphere of fire.

That same morning around 3 am in Huyton and Whiston, people saw strange glowing green UFOs of the – humming top – design seen twelve years before in the area, and three of them were spotted by a bricklayer and his brother heading to work in their van as it moved along Whiston Lane.

The brothers, Mike and Jim Stuart, watched the trio of UFOs slow down as they travelled across Huyton and Prescot Golf Course and then one of the craft broke formation and swooped down on the van.

The UFO was about 30 feet in diameter, and through an oval window, the Stuart brothers could see silhouettes of small child-like figures. Two bright globes of light shot out of the UFO and almost touched the van.

Lightning forks shot from these globes and the UFO travelled alongside the van for less than a minute when it almost blinded the brothers with an intense blast of white light. Jim Stuart floored the accelerator and managed to get away from the stalkers in the saucer.

The Ministry of Defence said it had no idea what had caused the UFO scare and astronomers had no meteors to blame, but the extent of the sightings was so widespread, something unearthly undoubtedly invaded our airspace that morning.

Will we ever know the truth? Keep watching the skies…