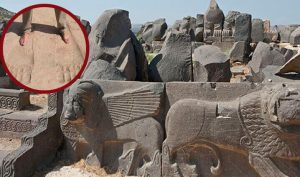 A pair of gigantic footprints engraved just outside the entrance of the Ain Dara Temple hint at the importance and mystery of this place.

These footsteps stand as a reminder of a long-forgotten time when ‘gods’ walked among humans, or maybe only to make sure that the following generations won’t forget or deny the time when giants walked among us.

The ruins of a once-remarkable structure lay just west of the Syrian village of Ain Dara, northwest of Aleppo. It first drew attention in 1955 when a huge basalt lion had been uncovered in the area by chance. It stood there as a proud reminder of an ancient culture, so archaeologists soon started taking interest in it.

The excavation process lasted between 1980 and 1985, and what they had discovered bared resemblance to the biblical Temple of Solomon, although later it proved they were not the same buildings.

“The similarities between the ‘Ain Dara’ temple and the temple described in the Bible are indeed striking,” Bible History Daily reported. Both buildings were erected on huge artificial platform (2.5 foot) built on the highest point in their respective cities”

The platform on which the temple stood was guarded on all sides by lions, sphinxes, mountain gods and other mystical creatures with long claws of which only the feet remain, all of them carved from large blocks of basalt. 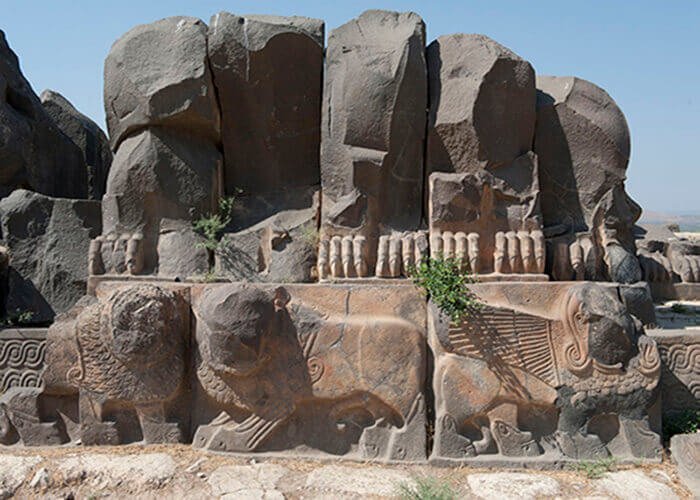 The temple portico was reachable after climbing a colossal staircase flanked on both sides by a sphinx and two lions. The middle room would then be accessible, followed by the main hall at the end of which stood the inner sanctum ornate with cult statues.

One of the most interesting aspects of the Ain Dara Temple are the footprints (measuring about 1 meter in length) engraved into the rigid stone floor at the entrance of the temple.

One pair of footmarks is found on the floor of the portico, while a second footprint stands about 30 feet away, just at the entrance into the main hall.

It would take a considerable leap of 30 feet to reach from one footprint to the other, or just a regular step if performed by a 65 feet tall giant. Historians agree that these markings were not left by real giants walking the Earth in ancient times, but they still pose a mystery that cannot be explained nor understood.

It’s possible that the creators of this temple were responsible for these peculiar carvings, but it’s still to be determined why; also what was their purpose?

At first glance, the giant footprints reveal our forefathers notion of giant humanoid beings, and they could stand as a reminder of these ancients who were possibly the deities worshiped in this temple.

The Ain Dara Temple is believed to had been erected at the start of the Iron Age, somewhere between 1300 and 1000 B.C. It was extended by the Syro-Hittites, a group of political entities which emerged after the fall of the Hittite Empire.

They became the dominant power in the Eastern Mediterranean region until their demise at the hands of the Neo-Assyrian Empire towards the end of the 8th century B.C.

The heritage left behind can be interpreted in many ways. What seems certain is the opulent cultural influence coming from ancient Mesopotamia, respectively from the Sumerians.

Although there’s a millennial difference in the timeline of these peoples, the symbols and statues engraved on the walls of both civilizations carry a strong resemblance. 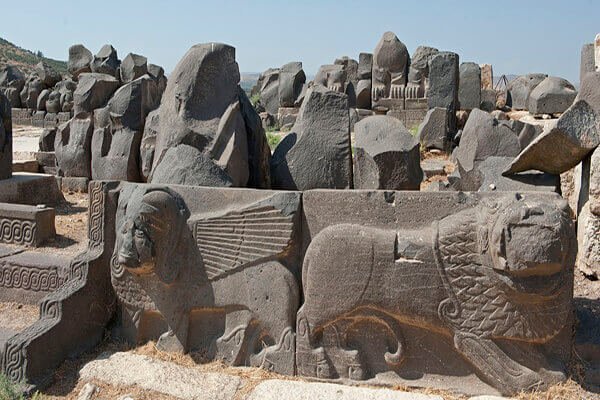 The giant one meter footprints discovered at Ain Dara temple could be imprints of the gods. These mystic rulers are described by the Sumerian King List as mythical beings from before the Flood and up until the making of mankind.

Only a handful of them are officially attested by modern-day history, although their names and kingship appear engraved on the Sumerian artifacts.

It’s possible that the Syro-Hittites carried with them the image of their gods and built temples to honor them. Knowing that an impending demise of their culture was inevitable, they left behind clues reminding of these gigantic rulers and teachers deemed as their makers.

Whatever the case, the Ain Dara temple adds another piece to the puzzle of humanity. Although many aspects cannot be explained with certainty and in an official manner, we can let our intuition guess for us this time. After all, we live our own realities and have out own beliefs.

In Search For Atlantis Of The Sands: Lost City of Iram

The Ġgantija Temples: Ancient Island of the Giants