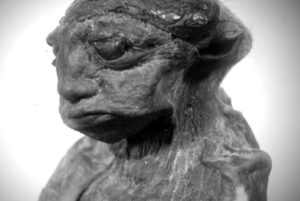 Cecil Main and a fellow prospector were prospecting for gold in the Pedro Mountains, 60 miles southwest of Casper, Wyoming in June of 1934, when they used explosives to break into a sealed cave.

What they found inside was not the valuable mineral they sought, but something infinitely stranger.

There, on a small rock shelf, sat a bizarre set of mummified remains that have captured the imagination and stirred debate in the 80 years its discovery. The human mummy was frozen in a seated position, preserved in the dry air of the cave. It stood only 7 inches tall, and weighted about three-quarters of a pound. 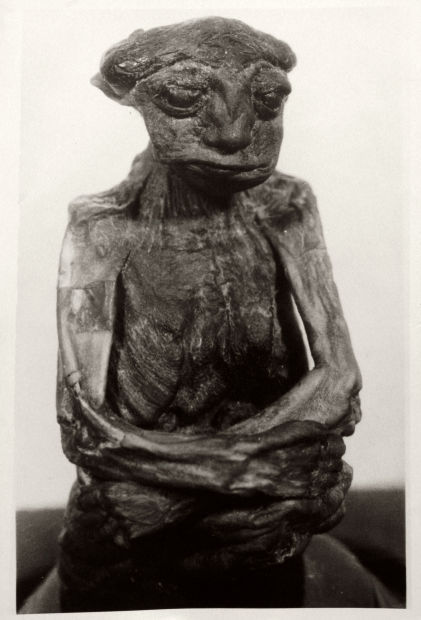 Casper Main swore to the discovery two years later in a signed affidavit dated November 13, 1936. However, there is confusion as to who exactly discovered the remains and when.

Some newspaper articles place the discovery in 1932, a full two years earlier than when Main claimed to have found the mummy. Others claimed that Main was not the discoverer at all; rather, the mummy was found by an unnamed shepherd.

What is certain is that the tiny mummy was found, and that it traveled a long, strange path before its disappearance some 20 years after its discovery in 1950.

When Main swore to his affidavit, he claimed that the mummy was owned by a man named Homer F. Sherrill, and was being kept in the Field Museum in Chicago. However, the Field Museum has no existing record of the mummy ever being in its possession.

More likely is that the mummy made the rounds in Casper, where Main and his fellow prospector showed off the remains in Casper as a curiosity. The remains reportedly were bought and displayed in a drugstore for some time, reminiscent of how Elmer McCurdy’s remains were put on display by the embalmer who mummified him.

What is more certain is that, around 1950, a Casper businessman named Ivan Goodman acquired the remains. He took the mummy to Dr. Harry Shapiro, curator of biological anthropology at the American Museum of Natural History in New York. The scientist examined and x-rayed the mummy.

He sent the x-rays to George Gill, a professor of biological anthropology at the University of Wyoming. The scientists found that the remains were likely those of a child, stillborn or dead soon after birth, who suffered from anencephaly, a congenital defect characterized by the absence of most of the brain. 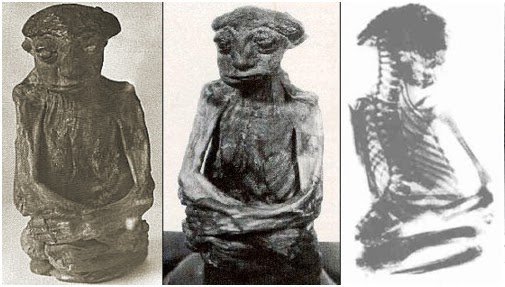 Shortly after the examination, Goodman made a second trip to New York, where he gave the mummy to a man named as Leonard Wadler, who claimed to want the mummy for study. Goodman died later in 1950, and Wadler hung on to the remains. They have not been seen again for 60 years.

Some believe Wadler was a con man, who sought to use the mummy to make money. They believe he took the remains to Florida, where they remain to this day. However, in the absence of a paper trail or any evidence, it is hard to tell for sure.

Little People in the mountains

While the Pedro Mountain Mummy is no longer with us, the photographs and x-rays remain. These photos have sparked the imagination for decades, leading people down strange rabbit holes. Native American legends from the Pedro Mountains region claim that a race of tiny humans live there.

These Little People could be friends to humans or foes, depending on their mood and how people behaved toward them. To believers, the mummified remains confirm that the Little People exist. Still, others believe that a race of pygmies lived in the Pedro Mountains, but that they were of a less supernatural origin. 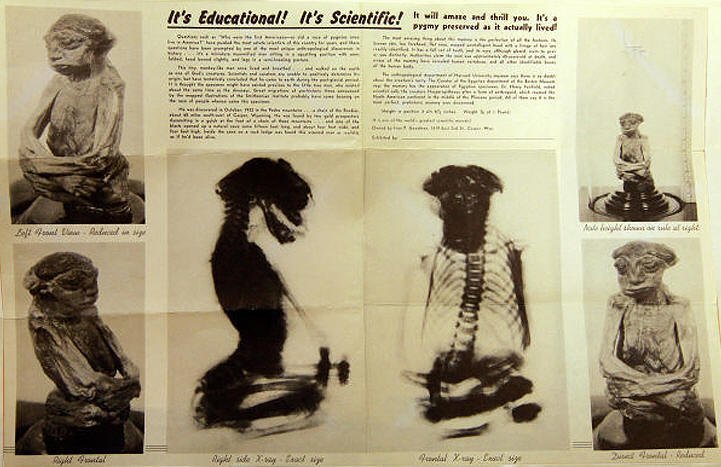 They seek the Pedro Mountain Mummy to examine it in hopes of overturning conventional evolutionary explanations for human origins. They believe the mummy was millions of years old, far older than the current understanding of evolution can account for.

Others seek the little mummy for less pseudo-scientific reasons. Dr. Gill remains intrigued by the remains, wanting to rediscover the mummy whose x-rays he examined so long ago.

The doctor did an interview with Unsolved Mysteries in 1994, hoping to stir up interest in the matter. A Wyoming rancher saw the episode and brought another mummy found in the Pedro Mountains. The remains were of a little girl, in a similar state as the Pedro Mountains Mummy.

Gill examined the mummy and found evidence that the child suffered anencephaly. The remains were carbon-dated, revealing that they were 300 years old, not the million plus that advocates of the human pygmy hypothesis believe.

These tiny remains point to a little known part of history. Whose remains are they? Likely they are Native American. Was the practice widespread, and what sorts of rituals and religious meanings were attached to the act of mummification.

Sometimes mummification is accidental, but most often there is a religious component to the practice. For example, Europe’s bog mummies were likely a mix of the two; many were likely ritual sacrifices to the spirits and gods in the bogs, while their sacrificial location incidentally preserved them.

However, the two known mummies from the Pedro Mountains appear to have been deliberately placed in the caves, and both were ancephalitic. If others were found, it could point to a little-known ritual practice performed by Native Americans in the area that today has been lost to history.

But that is all speculation. There are many Native American stories about little people. The Pedro mummy famously disappeared, leading to many theories about this unexplained mystery.