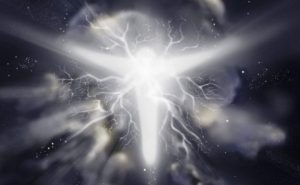 By the time the paramedics arrived at the Royal Society of Arts it was too late. The soul of Montague Keen had left his body and his corpse was cooling on the floor.

Montague watched powerlessly as his body was loaded into an ambulance. His wife, Veronica, stood watching, tears flooding down her face. Her friends whispered words of hope, but in her heart she knew her husband was dead.

Moments before his death, Montague was engaged in a passionate debate on the paranormal at the Royal Society of Arts. It was his life’s work and one that he lived and breathed to the last.

As his life slipped away, the 78-year-old reaffirmed the pact he had made with his wife. Both promised that whoever died first would work from the spirit world to prove that life continued after death. It was a romantic pledge on an epic scale and one that Monty was determined to keep.

And now, scientists in America may have discovered compelling evidence that Montague’s soul has indeed survived physical death and is working from the spirit world to fulfill his promise to Veronica.

“Monty still exists,” says Professor Gary Schwartz of the University of Arizona. “He’s also learning and behaving as a scientist on the other side. He is passing information to us through spiritual mediums.

“As a scientist I have to be neutral and unbiased in my work and its significance. I have to sit on the fence. But the data given to us by Monty has pushed me off that fence. I’m now convinced that the survival of the soul after physical death is the only explanation that fits the data we’ve gathered.

“It’s clear to me that Monty is continuing his work from the other side.”

Montague Keen died on January 15 2004 following a massive heart attack. Throughout his life he had an abiding interest in the paranormal, serving on the council of the Society for Psychical Research for 55 years.

During the 1980s he investigated crop circles and concluded that though many were hoaxes, many more were the result of intelligent psychic forces.

In the 1990s, he was the principal investigator in the Scole group of mediums. These mediums, who lived in the Norfolk village of Scole, claimed to receive messages and materialized objects from spirits. After years of patient research he concluded that the mediums were genuine, but was unsure whether their power came from psychic forces in the human mind or from the spirit world.

Because of his track record, many paranormal researchers believed that if anyone could return from the spirit world with evidence of life after death, it would be Montague. They did not have to wait long.

Just six days after his death, the first tentative evidence of his spiritual survival appeared. During his wake, the medium Dinesh Solanki apparently saw Montague standing next to a TV set with a huge smile on his face. Dinesh says that Montague was hugely enjoying his wake. Moments later, a picture came crashing down off the wall.

Over the following days and weeks, mediums around the world started receiving messages from an unknown spirit. At first, the messages were a little fuzzy, almost out of focus. The words were a little garbled, as if a child was learning to talk for the first time. But very quickly the thoughts and messages became clearer and sharper. It was obvious that a powerful mind was at work.

One of the first mediums to receive a coherent message was Dinesh.

“Monty came through loud and clear,” says Dinesh. “He said that he wanted Veronica to convert his ashes into a diamond which was to be worn as a necklace. I was a little shocked because it sounded a strange thing to do.”

Veronica was stunned by this insight: “Monty and I were discussing this in bed the night before he died. Dinesh could not have known this. It was known only to me and Monty. For me, this was the first concrete evidence that Monty had indeed survived death.”

Shortly afterward, the Irish medium Christine Holohan received a message for Veronica from Montague. It was simple and to the point.

“He wanted to remind me to plant the spring barley,” says Veronica. As a former permanent secretary to the parliamentary committee of the National Farmers’ Union, it was certainly a subject close to his heart.

“It was pure Monty to worry about getting the crops planted in time,” laughs Veronica. “He contacted Christine at 11:00pm but assured her that it wasn’t too late to call as I was still awake reading a book in bed.”

Shortly after Montague had honed his communication skills, mediums around the world started receiving messages for Veronica. Psychics from Britain, Germany, New Zealand and the US contacted her to say that Montague still passionately loved her and that she should continue her work.

“Monty described his death to several mediums,” says Veronica. “He told Melanie Polly that he was bitterly upset when I was moved away from him as he was dying. He couldn’t move his lips to talk to me but he desperately wanted to say goodbye one last time.

“People assume that only the young can love this deeply. It’s not true. We are soul mates that should never be apart. We are still connected emotionally and spiritually.

“I miss him so, so much. My one consolation is that he says he can’t wait to show me around the spirit world. We travelled all around the globe together so eternity has to be next.”

All of this spiritual chatter from Montague eventually caught the ear of Professor Gary Schwartz of the University of Arizona. Professor Schwartz is one of the world’s foremost academic experts on the paranormal, with an enviable roster of scientific papers under his belt. He immediately saw the value of trying to make contact with Montague Keen.

“Montague was a renowned psychic investigator,” says Professor Schwartz. “If anyone could communicate after they had died, it would be him.”

Professor Schwartz moved swiftly to begin a rigorous scientifically controlled study of Montague’s apparent return. He began a ‘double-blind’ trial. In this, four mediums were asked to make contact with the spirit world under controlled conditions.

None of the mediums knew the name of the spirit they were trying to contact. They were given only Veronica’s first name and her relationship to the deceased. The mediums were then asked to make contact with the spirit world and to relay any information they received.

This information was then scoured for facts that could be checked for accuracy. After this, the mediums once more contacted the spirit world to gather information from other entities. This was known as the control reading. The verifiable facts from Monty’s reading, as well as those from the control, were sent to Veronica as a questionnaire. Veronica was then tested to see if she could pick out the information allegedly provided by Montague from the background ‘noise’ of the other spirit.

“To add another layer of rigour,” says Professor Schwartz. “I was not involved in collecting the data. I knew Monty so I did not wish to be accused of unconsciously biasing the results.”

In many ways, Schwartz’s ‘double-blind’ trial was as rigorous as a clinical study of a new pharmaceutical drug. The only things that could not be accounted for is massive and elaborate fraud – or a million to one statistical fluke that makes random facts appear to be gospel truth. But these risks also apply to drug trials. Only further investigations by other scientists in independent laboratories can overcome such hurdles. Professor Schwartz says he is happy to co-operate in these further studies.

When the first results were analysed, they were amazing to say the least. Professor Schwartz says that over 80 per cent of the information transmitted by Montague to the medium proved to be correct.

The spirit was able to accurately describe his death and where it happened. He also described the manner of his father’s death in World War II. Montague also correctly stated that Veronica had installed new blinds in their house a few days previously. Perhaps more interestingly, he also predicted that this article in the Daily Mail would indirectly force a named prominent American paranormal sceptic to defend his viewpoint on a famous US TV news programme.

Montague also predicted that there would be a high profile event dedicated to him. This is proving to be true. Veronica and the Society for Psychical Research are organising a tribute at the Royal Society of Arts on June 27th. The seat on which he died will be left unoccupied. Through other mediums, Montague has promised to attend and they privately hope that he will lay on a paranormal show for all those attending.After his stunning preliminary results, Gary Schwartz dug a little deeper to see if the medium could convince him personally that he was indeed in contact with Montague. The experiment was re-run with a few procedural changes. This time over 90 per cent of the information proved to be accurate. And some of it proved to be even more specific.

Professor Schwartz says: “Under controlled conditions the medium said that September 23rd is important to him. That is the date of his and Veronica’s wedding anniversary.”

Given that the medium did not even know Montague’s or Veronica ‘s surname, there is no realistic way of her knowing this information.

If Professor Schwartz’s work proves to be correct then it offers a fascinating glimpse into the afterlife. He has already begun to ‘debrief’ Montague about his experiences.

“He says that time does not exist in the afterlife in the same way it does for us. He experiences time because it affects those he loves not because it affects him directly. He’s also less worried about what people think of him. The ego appears to die, which is good, otherwise heaven would become hell.”

Professor Schwartz is planning to extend his work. With Montague’s help, and that of other spirits, he hopes to begin building up a comprehensive picture of the afterlife. He is currently devising a spirit questionnaire with which he can interrogate departed souls.

But Professor Schwartz has already begun to re-think his life and how it may best prepare him for the spirit world.

“The afterlife appears to be very much coloured and limited by what we experience in this life,” says Professor Schwartz. “The reason for awakening before we die is so we can take full advantage of the afterlife.

“If we do not, then we will become imprisoned by our biases and beliefs. That’s what the data shows to me.”

Psychiatrist Who Studies Cases of Past Life Memories in Children

Life After Death: Are There Clues From Near Death Experiences?