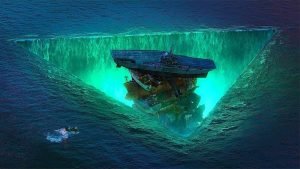 The ocean is full of mysteries. Humans traditionally fear the ocean and prefer to admire it from ashore. There are places in the world ocean, which people fear especially.

Planes and ships disappear in those places without a trace. There are also giant whirlpools, giant waves and mysterious luminous circles in the water…There is a place in the ocean, where all of those phenomena exist at once. It is the Bermuda Triangle.

The square of the Bermuda Triangle makes up approximately a million of square kilometers. The triangle spreads from Florida to the Bermuda islands, then to Puerto Rico and back to Florida via the Bahamas. 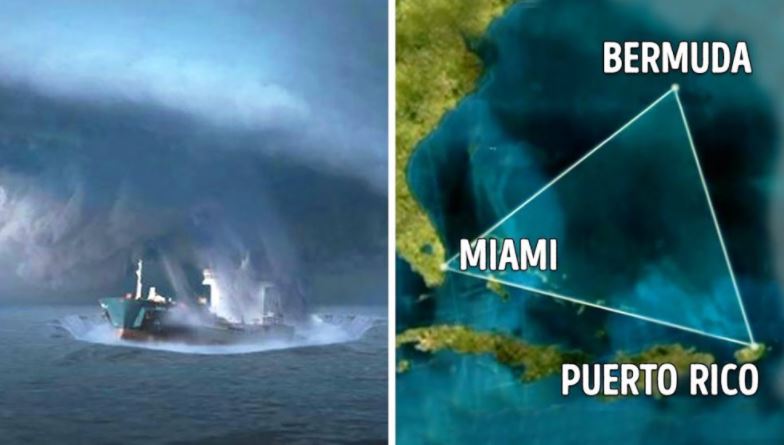 The news about mysterious disappearances of ships and planes in the area appeared at the end of the 1940s. A group of five Avenger bomber planes did not return to the base on December 5, 1945. The pilots only had time to say that they were entering the “white water.”

So many theories – pseudoscientific, paranormal and ufological – have been analyzed in an attempt to explain the mysterious phenomenon. The most reliable theory was set forth by Joseph Monaghan of Australia’s Monash University.

In 2003, the scientist published an article in American Journal of Physics titled “Could Methane Bubbles Sink Ships?” The researcher described the experiments, which he conducted to prove that it could be possible. His theory was supported by many other scientists.

According to Monaghan, huge bubbles can erupt from undersea deposits of solid methane, known as gas hydrates. An odorless gas found in swamps and mines, methane becomes solid under the enormous pressures found on deep sea floors.

The icelike methane deposits can break off and become gaseous as they rise, creating bubbles at the surface, the AP wrote. The gas, when concentrated on the surface, can trigger malfunctions in the work of electronic equipment on board aircraft and ships. Ships can sink in such places because of the sudden reduction of the water density.

Another Bermuda phenomenon is the so-called Flying Dutchman – the inexplicable disappearance of ship crews. Most likely, the reason for such incidents is the infrasound. Some scientists believe that the infrasound is created by gas bubbles as they rise to the surface.

The infrasonic vibrations trigger dangerous resonance of the heart and the blood vessels. When having such resonance, a human being may have a panic attack. It can be possible that sailors, gripped with fear and panic, jump overboard in an attempt to get rid from the bizarre feeling.

However, there is no theory in the world to explain why the Bermuda Triangle stopped devouring ships and planes in the middle of the 1980s. Lawrence David Kusche, the author of “The Bermuda Triangle Mystery: Solved,” said that there was no mystery at all. According to Kusche, the mystery does not exist – it was made simply made up by people. 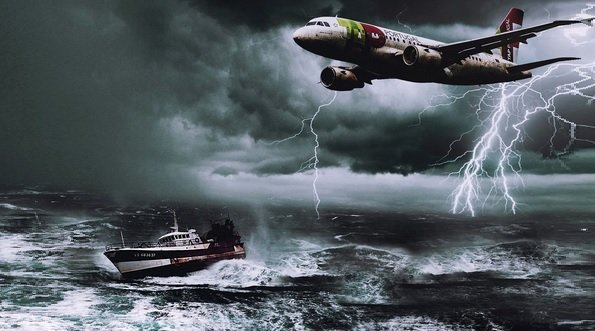 Kusche approached the problem seriously. He studied the files of insurance companies, coast guards reports, investigation reports, etc. Nevertheless, the sad title of the Bermuda Triangle as the most mysterious place of the world ocean is justified by several peculiarities.

What is more, spaceships registered considerable deviations of earth gravity in the area. The gravity in the Bermuda Triangle is stronger than anywhere else in the world, which causes the formation of the Gulf Stream and its movement to the north of Europe.

As for the reduction of the number of mysterious catastrophes, many explain this phenomenon with the appearance of space navigation. In addition, the equipment of planes and vessels has become much more technologically advanced during the years.

There is a certain peculiarity for which the sea was named so. Oceanic currents there move clockwise. A lot of gulfweed, or sargasso, gets accumulated in the water area, which the currents outline.

The sea is a giant whirlpool that has its own laws of life. The water temperature inside the whirlpool is much higher than on the outside of it. The water is still there nearly always. One can also see miraculous mirages there, when it seems, for example, that the sun rises in the east and in the west at the same time.

Richard Sylvester of the University of Western Australia suggested that the giant whirlpool of the Sargasso Sea is a centrifuge, which creates smaller whirlpools that reach the area of the Bermuda Triangle.

The whirlpools cause mini-cyclones in the air. The cyclones continue the spiral movement of water, from which they appear, and may thus make small aircraft crash into the ocean.

This is a region of the Pacific around Miyake Island, about 100 km south of Tokyo. This “relative” of the Bermuda Triangle can not be found on any map, but sailors prefer to keep away from the region. Storms may start there out of the blue and disappear just as they started.

Whales, dolphins and even birds do not inhabit this area. Nine ships disappeared in the region in five years in the beginning of the 1950s. The most famous of such incidents is the disappearance of Kaiyo Maru No.5, a Japanese research vessel.

This is a very seismically active region. The seabed is moving constantly; volcanic islands appear and disappear on a regular basis. The region is also known for its highly active cyclonic activity.

The Cape of Good Hope

This area off the coast of South Africa is also known as the Cape of Storms. A great deal of vessels have wrecked there in hundreds of years. Most of the wrecks took place because of bad weather, particularly killer waves, aka cape rollers. Scientists also call them solitary waves.

They are very large waves, up to 30 meters high. They are formed as two coherent waves become one. The height of one cape roller is equal to the heights of those two waves. They do not change their shape during the distribution process even when they encounter other similar waves on the way.

They can last for very large distances without losing their power. Such huge waves create very large cavities in front of them, the depth of which corresponds to the height of the waves.

There are many other places in the world ocean, where such waves can occur, but the area near the Cape of Good Hope is especially dangerous at this point.

The eastern part of the Indian ocean and the Persian Gulf

This area is known for a very impressive and mysterious phenomenon – giant luminous and whirling circles on the water surface.

German oceanologist Kurt Kahle believed that the luminous circles in the ocean appear as a result of underwater earthquakes, which result in the luminescence of plankton.

As long as this impact occurs selectively, the spinning wheel illusion is created. This hypothesis has received criticism lately, because it is incapable of explaining the logic in the transformation of the luminous circles. Modern science has not been able to explain the accurate round shape of the objects.

Scientists can not explain the rays that come out from one center, nor can they say anything reasonable to explain the velocity of circulation. The version of the UFO seems to be the primary one in this case. 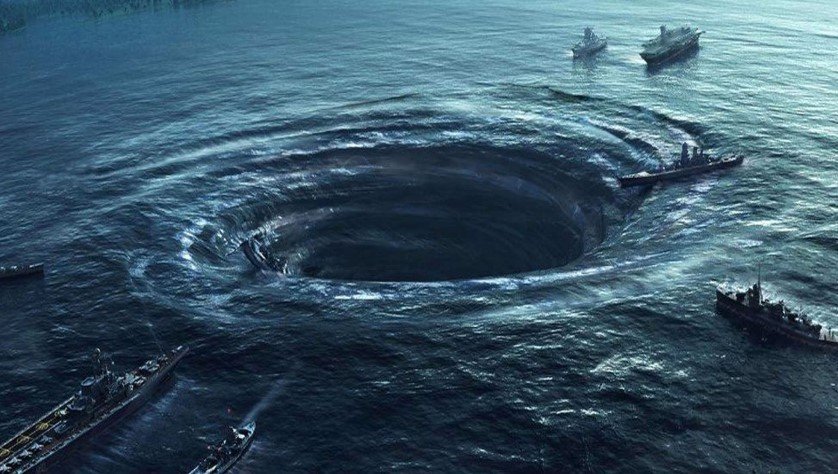 This whirlpool is not of planetary significance as the whirlpool in the Sargasso Sea. Nevertheless, sailors know dozens of blood-chilling stories about the amazing phenomenon.

This whirlpool occurs twice a day, in the western part of the Sea of Norway, off the north-western coast of Norway. The word ‘maelstrom’ was popularized by Edgar Poe in his story “A Descent into the Maelstrom.” A maelstrom is a very strong and large swirling body of water which has considerable downdraft.

Strangely enough, the whirlpool changes its direction to the opposite once in every three or four months. Maelstrom whirlpools may occur in other regions of the globe, including the Bermuda Triangle.

It is generally believed that the maelstroms normally whirl anticlockwise in the Northern hemisphere and clockwise – in the Southern hemisphere, which is explained with the rotation of planet Earth.