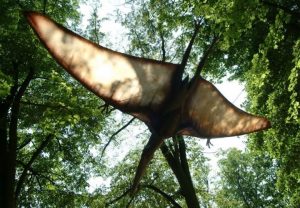 There may be many strange creatures inhabiting the dense jungles and mountainous areas of Papua, New Guinea. But, the strangest may not be in the jungles at all, but rather, above it.

It is called Ropen or Demon Flyer. If reports are true it could in fact be a surviving dinosaur, a Rhamphorhynchus, a type of Pterosaur with a diamond-shaped tipped tail.

The Ropen has been seen countless times by the native people over many years. They describe the Ropen as having a wingspan of about 4 to 5 feet, a long neck with a crested head, ribbed wings, and a long tail, with a diamond shape at the end.

Despite popular myth, the Ropen itself was not fabricated by creationists. It was first sighted in 1935 by famous biologist and entomologist Evelyn Cheesman, who believed in evolution, and was well respected in the scientific community.

The first sighting by Cheesman described the Ropen as glowing anomalies, very different from the pterosaur description.

In New Guinea, Cheesman briefly investigated the mysterious flying lights now called ropen lights decades before the late-20th Century and early 21st Century ropen expeditions. In her book The Two Roads of Papua, she dismissed the possibility that the lights are from ‘any human agency.

One of the stranger aspects of the Demon Flyer is that it appears to be bioluminescent. In fact, most of the reported sightings are the so-called Ropen lights which is said to last for about 5 seconds.

No one seems to know what the purpose of the lighting would be but it is when the Ropen illuminates that the witnesses can see the silhouette of the creature flying overhead.

The Ropen are seen most often about two hours after dark. It is believed that the Ropen spend the daylight hours in the jungle and then, in the darkness, go to nearby reefs to feed. Ropen are believed to be fish eaters, although there have been a few reports of the Ropen feeding on a human corpse.

Some believe that the Ropen is simply a common animal being misidentified. The Flying Fox bat is the largest of the bats, with a wingspan of up to six feet. The Flying Fox however, is a fruit eater, and very different in appearance compared to the Ropen. The Flying Fox does not have a long tail, and certainly does not light up.

The book Searching for Ropens says that the “ropen” light of Umboi Island lasts for about “five seconds.” There is also said to be a creature called “Duah” that is said to be another kind of ropen, but with a 20 foot wingspan and a bony crest on its head.

However, the creature referred to as “Ropen” has a 1-meter wingspan, not 20 feet. According to Searching for Ropens the correct word is actually “duwas,” and it is just another name, in a different language, for the same creature.

Of course there are many skeptics of the Demon Flyer reports, after all, there really is no hard evidence that the creature exists. Scientists point out that the descriptions of Ropen do not match the fossil records.

However, if this really is a surviving Pterosaur it seems that it would have continued to evolve, perhaps accounting for the minor differences.

Sightings of Lake Worth Monster: A Mysterious Creature Was Photographed