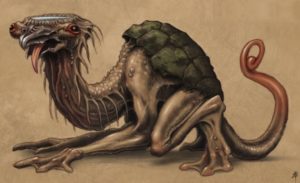 Kappa is an amphibious demon or imp found in traditional Japanese legends. They are typically depicted as green, human-like beings with webbed hands and feet and a turtle-like carapace on their backs.

A depression on its head, called its “dish” (sara), retains water, and if this is damaged or its liquid is lost (either through spilling or drying up), the kappa is severely weakened.

The kappa is said to be roughly humanoid in form and about the size of a child, inhabiting the ponds and rivers of Japan. Clumsy on land, they are at home in the water, and thrive during the warm months.

It is typically greenish in color (or yellow-blue), and either scaly or slimy skinned, with webbed hands and feet, and a turtle-like carapace on its back. Kappa are generally the size and shape of a human child, yet despite their small stature, they are physically stronger than a grown man.

One peculiar trait is that it has a cavity on its head called a sara (“dish”, “bowl”, or “plate”) that retains water or some sort of liquid, which is regarded as the source of the kappa’s power or life force.

This cavity must be full whenever a kappa is away from the water; if it ever dries out, or if its water is spilled, kappa loses its power and may even die. The kappa are sometimes said to smell like fish, and they can swim like them.

According to some accounts, its arms are connected to each other through the torso and can slide from one side to the other. While they are primarily water creatures, they do on occasion venture onto land. When they do, the “dish” on their head can be covered with a metal cap for protection.

At around 11 PM on August 1, 1984 in the town of Tsushima in Nagasaki prefecture, a squid fisherman named Ryu Shirozaki was walking home from the local pier after work.

As he passed near the Kuta river, he came upon a small group of children playing at the water’s edge. While it was not entirely uncommon to encounter people fishing in the river at night, it was rather surprising to see youngsters there.

As Shirozaki approached the children, he was struck by how bizarre they appeared in the moonlight. He could make out swarthy faces, unusually spindly arms and legs, and glistening skin. Suspicious, Shirozaki called out to them as he neared, but they seemed startled and quickly disappeared into the water.

The next morning when he returned to the same spot, Shirozaki discovered a set of moist, teardrop-shaped footprints on the nearby pavement. The prints, which appeared to consist of a slimy substance that had begun to coagulate under the hot morning sun, stretched for about 20 meters.

When police forensic investigators arrived on the scene, they determined that the slimy footprints consisted of an unknown secretion.

They took a sample to the lab for analysis, but the results unfortunately turned out to be inconclusive because the sample was too small. The police eventually dropped their investigation, and the mystery of the slimy footprints was never solved.