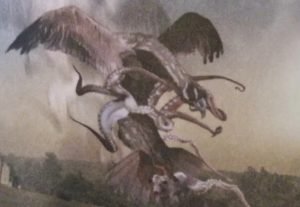 For about a month in 1909, Frederick County Maryland was under siege, by a monster. They called it the Snallygaster or Schneller Geist, meaning “Quick spirit”.

For years, the Snallygaster lived only on the pages of folklore until 1909 when stories of the beast began to appear in newspapers.

The First report of the Snallygaster came from a man named James Harding.

Harding said he saw the creature flying overhead at a close distance. His description of Snallygaster was, a huge winged monster with a long sharp beak, claws like steel hooks, and having one eye in the middle of its head. He also said it had a chilling screech, “as loud as a train whistle”.

The sight of the Snallygaster cruising overhead became common for a few weeks, and many people reported seeing the monster. Despite its ferocious appearance, the Snallygaster seemed to be harmless at first.

That soon changed when one woman was reportedly attacked by the beast, she escaped with minor injuries. Bill Gifferson would not be so lucky. As others looked on, Gifferson was attacked and killed by the Snallygaster, which reportedly devoured the victim. 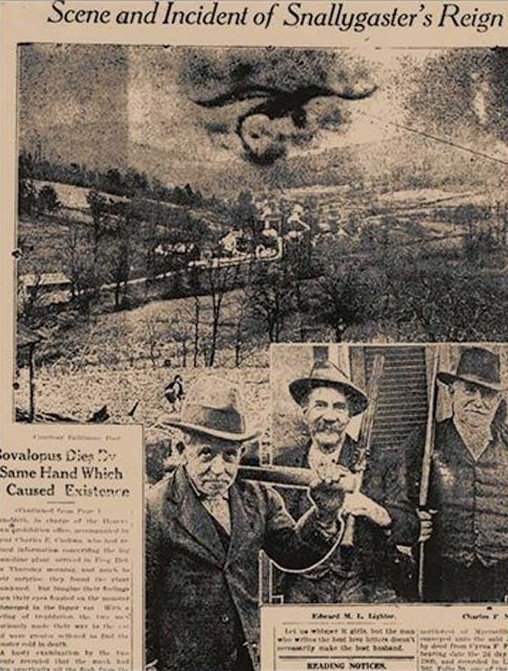 A February, 1909 article claimed that a man had been seized by the winged creature, which proceeded to sink its teeth into his jugular and drain the body of blood before dropping it along a hillside.

There were stories of the monster laying eggs on at least two occasions. One man reportedly tried to incubate one of the eggs. The story got so big that President Theodore Roosevelt is said to have considered canceling a long-planned African safari, to go hunt the Snallygaster. But as February ended reports of the Snallygaster began to rapidly decline.

Then in early March, a report of the death of the monster. It was said the Snallygaster met its end when it flew over a 2500 gallon moonshine still. The fumes from the fermenting brew brought the beast down. It crashed into the still and was killed.

Two revenue agents had already discovered the moonshining operation and arrived shortly, with dynamite. They reportedly blew up the still, and the Snallygaster.

No appearances have been reported since.