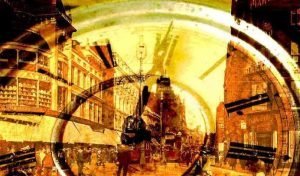 One of the most interesting and best known stories of Time Slipping on Bold Street occurred in 1996. The Time Slip involved a couple, Frank and Carol, who went to Bold Street to do a little shopping.

Just as others have experienced, Frank and Carol found out that a simple shopping trip to Bold Street can turn out to be a very strange and puzzling journey.

When the couple arrived on Bold Street they went their separate ways. Frank headed to a music store on Ranelagh Street to purchase a new release while Carol went to Dillons, a bookstore.

Frank found the music he wanted and went to Dillons where the couple had agreed to meet. Then something unexplainable occurred. As Frank neared Dillons everything seemed to look strange, the Dillons store had the name “Cripps” on the front of the building and that was not all.

As Frank looked around he seemed to be in another time. The people walking the street were dressed oddly, appearing to be from the 1950s or 60s as did all the cars. Then seemingly coming from nowhere a van zoomed past him, honking its horn. The name on the side of the van was “Cardin’s” a name Frank was not familiar with.

As Frank looked at the “Cripps” building he saw a young woman standing at the front of the store looking in the window. She stood out because she was dressed in modern clothing as if she and Frank were from the same time.

Frank’s mind then switched to his wife Carol who had gone to the store. As Frank, followed by the young woman entered the front door of “Cripps” everything changed and they were obviously in Dillons Bookstore.

Frank looked to the young woman and ask “Did you see that?” the woman replied yes and added that from what she saw in the stores display windows she thought it was a new women’s wear store.

Frank soon meet up with Carol and I’m sure had a strange tale to tell her. Inside Dillons Carol had experienced nothing unusual.

We never heard any reasonable explanation for what Frank and the unknown young woman experienced. They are however certainly not alone in reporting a Time Slip event on Bold Street or Liverpool in general, as the location seems a hot spot for the phenomena.

It’s interesting to note that all the names mentioned in this story are real. “Cripps” which sold women’s wear was located on the site before becoming a Dillons bookstore. “Cardin’s”, the name on the side of the van that drove past Frank was a real company back in the 1960s.

If you’re in Liverpool and would like to visit the site of this time slip the former Dillons is now named Waterstone’s and is located at 14-16 Bold Street.