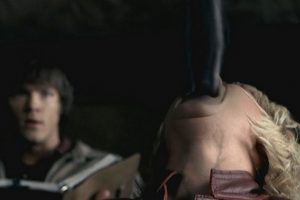 “The exorcist acts in the name of Jesus and with the strength that comes from Jesus.”

Some of the mystery surrounding the devil and exorcism is being unveiled in a television and Internet report series, detailing the work of the exorcist of the Diocese of Rome.

Society of St. Paul Father Gabriele Amorth, Rome’s exorcist for the past 21 years and a specialist in the figure of Mary, explained in the first edition of the series how he performs exorcisms.

“I go to one of Rome’s churches, to a parish that is closed during the day,” he said. “There is Mass in the morning and then the church is closed. There I perform the difficult exorcisms. I always work with seven to 10 people who help me, and use a small bed. Sometimes we need to tie people down or simply subdue them.”

With Christ, the priest said, it is possible to overcome the devil: “The exorcist acts in the name of Jesus and with the strength that comes from Jesus.”

“The devil is an angel, and therefore, a pure spirit created good by God and who perverted himself because he rebelled against God. Therefore, he maintains all the characteristics proper of a pure spirit, such as a very large intelligence, immensely bigger than ours.”

The devil is pleased by the way he is generally represented — with wings and a tail, horns, as a bat, etc. — because these images make him seem ridiculous and help people to believe that he does not exist, the exorcist reported.

Father Amorth suggested that diabolic problems be separated from psychiatric ones; and to do so an exorcist is needed in every diocese to help in discernment.

“Normally when a person experiences these conflicts and problems, the first thing he does is see a doctor and psychiatrist,” he said. “It is very difficult to distinguish the devil’s action from a psychological problem. The person goes to a psychiatrist and after years of therapy obtains no result.

“Then he begins to suspect that the problem is not a natural one and goes to a conjurer from whom he obtains even greater harm. This is what normally happens. At this point, it is possible that someone more experienced in these matters suggests an exorcist.”

The exorcist confirmed that Satan’s great foe is the Virgin Mary.

Father Amorth affirmed that on some occasions, God forces the Prince of Lies to tell the truth, however, the devil’s main struggle is to make man fall into sin.

“To lead man towards evil is to make him fall into sin; this is the devil’s preferred activity and we are all subject to it from our birth until our death.”

According to Father Amorth, Mary is a key figure in the fight against the devil’s tricks, especially since she herself was tempted: “Mariology is my field and I have often been asked if Mary was tempted by the devil. Definitely. When? From her birth until her death. But she always triumphed.”