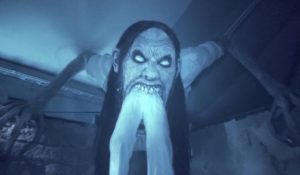 Greek vampires? When most people hear the word, “vampire,” they think about Bram Stoker’s Count Dracula and Transylvania. People view vampires as the blood drinking living dead. Eastern Europe is the motherland of most of the vampire lore; however other countries, including Greece, have their legends about the living bead.

The name of the Greek version of the Slavic/European vampire has its roots in the Slavic term vblk’b dlaka, meaning wolf pelt wearer. Most vampire legends involve drinking people’s blood. The vrykolaka doesn’t bite the neck of its victims to drink blood. Instead, it creates plagues of infections by walking around towns.

The vrykolaka has been blamed for Poltergeist activity, but the poltergeist is a totally different creature – it’s an entity agent ghost or human agent RSPK, recurrent spontaneous parakinesis.

Some people thought the vrykolaka caused Sleep Paralysis, similar to Old Hag Syndrome. This idea is based on the notion of the incubus and the Balkan vampire’s proclivity for killing victims by sitting on their chests.

Sleep Paralysis usually occurs when a person is supine, falling asleep or wakes up and isn’t able to budge or speak. It normally lasts for a few seconds or several minutes. Victims sense a malicious presence, which, often, involves feelings of horror and trepidation. Some people feel a heavy pressure on their chests.

How People Became a Vrykolaka

The creature knocked on people’s doors and disappeared if a person answered on the first rap. The person was condemned to death soon and became a vrykolaka. To this day, in certain pars of Greece, people don’t answer the door until, at least, the second knock.

It was believed that a vrykolaka can be created after living a sacrilegious life, an excommunication, being in buried in unconsecrated ground or by eating mutton that a werewolf tasted. Werewolves weren’t safe from turning into a vrykolaka. If a person killed a Greek werewolf, he or she could come back as a half breed vrykolaka and werewolf.

There were conditions that predisposed people to becoming a vrykolaka. These are when a parent or other people cursed their victims, people doing an evil or disreputable action against their family, including killing a sibling, committing adultery with a sister- or brother-in-law dying a violent death or having an inappropriate burial.

The Greek Orthodox Church and the Vrykolaka

When the religion became an dominant influence on Greek lifestyles, it had to deal with widespread belief in the creature. Its stance was that the devil inhabited bodies of the dead and made them to move.

The church’s clergy, upon occasion, linked the Vrykolaka’ s incidents to those of psychics, like Biblical story of the Witch of Endor, found in the Bible’s Chapter, I Samuel 28, when she summoned the dead Samuel. Finally, the clergy suggested that people night be inclined to being a vrykolaka if they died, being excommunicated, if they were buried without appropriate rites, if they were stillborn, if they died a violent death, or if they were born on one of the grand church festivals.

Approximately six months after Philinnon’s death, she was seen entering guest Machate’s bedroom. When host Charito questioned Machates the next morning about the incident, he said name was Philinnon. He showed Charito and her parents items she left behind, a ring and a breast band.

Her parents identified the objects as their dead daughter’s. The following night, Philinnon visited Machates’ bedroom. Her parents, eager to see her, stopped in. Philinnon scolded them for disrupting her time with Machates. She was granted three nights with him, but because they obstructed, she would die again. Her body became a corpse.

Phlegon, who lived during the Roman Emperor Hadrian’s reign recorded a story about a vampire. He was the town official who was summoned to quell rumors about Philinnon’s revitalization before they spread.

When he examined her burial vault, he found the items she took to Machate’s bedroom, but no body. A local sage said her body must be burned given the suitable purification ceremonies and performing placating rituals to the deities.

Vampires in Other Countries

Stories of the living dead are international and involved the creatures drinking blood. There were the Vampires of the Sixteenth Century in Silesia. During the late1500s, Johannes C. was prosperous, powerful and a Pentsch alderman.

Some people suspected he was thriving because he made a pact with the devil. After his burial, rumors started about a specter having his voice. According to contemporary accounts, his shade terrorized sleeping people.

In 1591, a shoemaker committed suicide, which was a dishonor. His family said he died from apoplexy so he could have a Christian burial. His ghost appeared day and night. After he committed suicide, one of his maids died. It was claimed that she returned as a chicken. She went into his widow’s house, grew bigger and gripped a maid’s throat with her talon. The maid survived..

There was the English vampire of Croglin Grange that terrorized Amelia Cranswell.