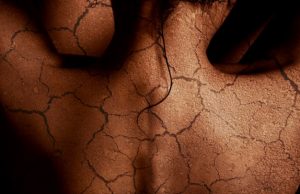 The victims feel as if bugs are crawling under their skin. Their doctors treat them as if they are insane. It is called Morgellons, the fiber disease, a mysterious skin disease that is currently spreading across the globe.

Those with this disease describe feelings of insects scurrying beneath their skin and have mysterious sores that ooze out blue and white fibers, some as thick as spaghetti strands. Attempts to remove the fibers are said to produce shooting pains radiating from the site.

To date, no clinical studies have looked into Morgellons. The first paper mentioning Morgellons was published in a recent issue of the American Journal of Clinical Dermatology, co-authored by members of the Morgellons Research Foundation, a non-profit organization devoted to raising public awareness about the disease.

The disease is named after a medical condition described in 1674 by the British author Thomas Browne. Known as “Morgellons,” Browne said the disorder caused children to “critically break out with harsh hairs on their backs.” However, the Morgellons Research Foundation says that it is doubtful that the 17th-century disease is related to modern-day Morgellons.Analysis of the fibers found in the sores suggest that they are more than just lint from clothing, carpets, or bedding, nor are the black specks

composed of pepper, as several dermatologists have proposed. Some suggest the fibers are made of cellulose, a molecule generally found in plants. And if placed in a Petri dish, the fibers taken from a Morgellons sore will continue to grow. 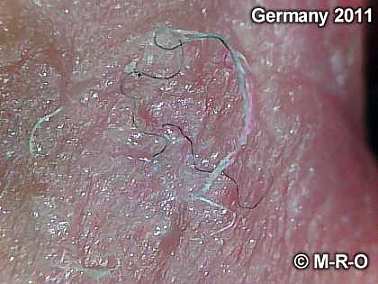 Most of the medical community seems to think that Morgellons is mass delusion and people complaining of the symptoms are diagnosed with “delusional parasitosis,” a psychological problem in which people imagine that they are infested with parasites. Yet patients all across the U.S. have reported the same symptoms long before hearing about the disease in the media or talking to other patients with similar symptoms.Some health professionals, such as Dr. Hildegarde Staninger from California, are finally beginning to sit up and take notice, bringing into play modern technology in the form of electron microscopes and spectrographic analysis in order to discover the secret behind the Morgellons mystery.

Often those unfortunate enough to suffer with the debilitating symptoms of Morgellons are also found to have contracted Lyme disease sometime in the past. Doctors are still trying to determine if there is a biological connection with the two, or if Morgellons is simply taking opportunity of an already compromised immune system. It is interesting that there is a connection between Lyme disease and Morgellons. This considering the attention Lymes has garnered with certain health professionals who feel that Lyme, like Morgellons, is not an ordinary illness.

There have been allegations over the years that Lyme disease was a natural disease made worse by genetic manipulation. The focus of these accusations is Plum Island, Just off Orient Point, Long Island, and six miles from the Connecticut coast. In 1954, research was influenced by the Cold War and scientists began studying ways to inflict damage on Soviet livestock. The Cuban government alleges that in the 1960s and 70s, bioweapons developed at Plum were deployed against Cuban agriculture, targeting pork, tobacco and sugar cane. 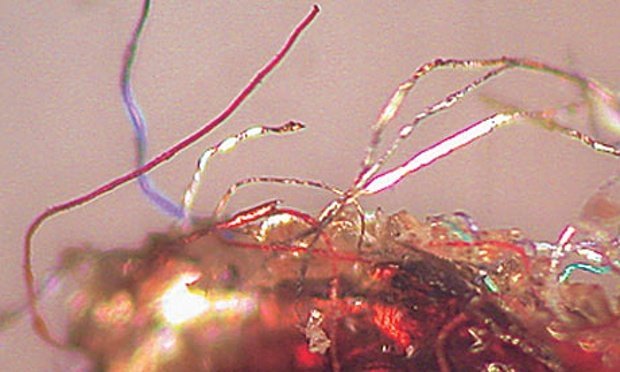 In surrounding communities, distrust of Plum Island runs deep. Lyme disease takes its name from a Connecticut town across from the island; many wonder whether birds or swimming animals could have brought the disease from Plum Island. Some suspect that it may have been deliberately released. Others speculate that Morgellons may have also originated on the island. Plum Island officials, of course, dismiss such hypotheses as fantasy. It is not too far outside of the spectrum to suggest that Morgellons could be a manmade disease.

One woman, identified by the name “L,” sent the author an e-mail stating that her husband, in 1993/1994, worked as a mechanical technician for a chemical plant that started an experimental program for their wastewater treatment plant adding plant organisms into their wastewater treatment facility. “He assisted with the installation of the startup equipment and overlooked the ongoing maintenance of this equipment. There were times he would be working on this equipment in nothing more than rubber boots and a dust mask. This plant organism was not supposed to infect humans.

“L” and her husband have both come down with symptoms of Morgellons. From the research so far, scientists who are examining the lesions and the fibers extracted from them are finding that the fibers might be made of cellulose, a molecule generally found in plants.

There is now strong data indicating that this disorder is associated with nanotechnology, specifically nanomachines in the form of nanofibers. The National Science Foundation (NSF) defines nanofibers as having at least one dimension of 100 nanometer (nm) or less.Fiber samples, taken from the skin of a Morgellons sufferer, when exposed to heat, did not burn until it has been heated to 1700 degrees F. As well, under examination with an electron microscope, fiber samples appear not to be organic.

They have no eukaryotic cells, no cell membrane. Meaning that Morgellons is not a parasite, it is not biological, it is a machine. In March and April 2007, Jeff Rense published and broadcast some capable research based on scientific techniques including electron microscopy, energy dispersive spectroscopy, Fourier transform infrared spectroscopy and Fourier transform Raman spectroscopy. The Team Leader of the research unit was Dr Hilgegarde Staninger of Integrative Health International at Lakewood, California.

The preliminary findings were disturbing. Morgellons appears to be a communicable nanotechnology invasion of human tissue in the form of self-assembling, self-replicating nanotubes, nanowires, and nanoarrays with sensors.

Other nanoconfigurations associated with Morgellons disease carry genetically-altered and spliced DNA or RNA. The nanomachines which precipitate Morgellons thrive in alkaline ph conditions and use the body’s bio-electric energy and other (unidentified) elements for power. There is evidence that certain of the tiny machines possess their own internal batteries as well. The Morgellons nanomachines are configured to receive specific tuned microwave, EMF and ELF signals and radio data.

At this point, why this is happening is anyone’s guess. We do know that Morgellons is commonly found in all body fluids, orifices and often even hair follicles, and are believed to routinely achieve total body systemic penetration.

If these findings are correct, and Morgellons is nanotechnology capable of taking over biological systems, the question remains whether or not these nanomachines were the result of an accident, or a deliberate release with the intention of infecting people for some unknown purpose.

It is almost as if Morgellons is in the process of reconstructing people into an entirely different life form; a cyborg-like creature, both biological and machine. As well, with the reports that the Morgellons nanomachines are capable of receiving radio signals, this could indicate that each infected person/system would be able to communicate with other Morgellon sufferers, creating the potential that each person would be like a single brain-cell of a larger, artificial intelligence.

Are we facing an invasion by machine intelligence, or is this a twisted attempt by some unknown group or government to achieve the ultimate control of humankind? Considering the current world situation, it would not be unreasonable to imagine that someone could stoop to such evil as releasing something such as Morgellons upon an unsuspecting planet. Sometimes the smallest thing can cause the biggest problems. We have to take a deeper look, beyond the affliction itself, before we will find any substantial answers.

Serial Killers Who Were Never Got Caught