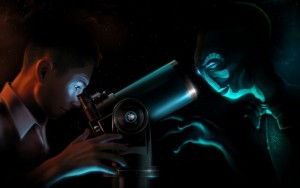 If a verified message from aliens is ever received, would the public be told about it? SETI – the Search for Extra Terrestrial Intelligence – does have an international protocol that if an alien signal is ever received, it would be disseminated among the astronomical community and made public.

And of course, says Mac Tonnies at the SETI Blog, “international cooperation might be necessary in order to distinguish a legitimate alien signal from any number of phenomena capable of generating false alarms.” But what if the signal is more than just extra-terrestrials saying hello?

Tonnies believes SETI’s plans for full disclosure only makes sense if the message is fairly benign. If the signal was a notice of impending doom from a black hole, supernova, or alien invasion – something we on Earth had little power to do anything about – Tonnies questions whether governments would choose to make such information public. But could something of this magnitude really be kept under wraps?

Frankly, I hadn’t really considered this scenario. When I think about SETI and the possibility of communication with an alien species, I envision, perhaps naively, what Tonnies calls the “lofty, abstract dialogue immortalized by Carl Sagan.” But of course, we have no idea of what any alien intelligence would like to say to us. If it was bad news, would governments of the world elect to withhold the information from the public?

Intrigued by Tonnies’ blog post, I contacted him to ask that question.

“I think it’s a very real possibility that generally goes unspoken,” said Tonnies, an author, essayist and blogger. “In the event of a bona fide signal, the public may only be made privy to part of it. It depends on the content and context of the message

Tonnies questions whether governments would elect to gamble with their respective economies and socio-political agendas for the sake of imparting knowledge that might only cause mayhem.

But wouldn’t governments want the people of the world to know so that intellectual resources could be pooled to try to find a solution to the problem? And what about the concept of an alien message bringing the world together?

“I think uniting the people of the world is the last thing governments want,” said Tonnies. “A rush to counter some cosmic threat is likely to have a war-time character, at least among scientists. And this is assuming that the threat we’re being warned about is something that can be acted upon with the technology available to us. If we happen across a generic warning, there’s no promise we’ll have the savvy to do anything about it given our level of development. If that’s the case, why would we expect prompt disclosure?”

Logically, however, it seems unlikely that aliens would call just to tell us we’re doomed. “It’s pretty foolish to expect aliens to conform to our definition of altruism — although I’m drawn to the idea of a ‘Galactic Emergency Broadcast System,’” said Tonnies. “Maybe ETs feel compelled to give less advanced civilizations a “heads up” in the event on some interstellar crisis because we might make for meaningful companionship a few million years from now.”

Maybe I’ve watched too many movies, but I’m still doubtful that an alien message, whether good news or bad, could be withheld from public knowledge. It would be too big, too transformational, too altering an experience not to be shared.

Two Mexican Cities Are Protected By Aliens Who Live Underwater

Ancient UFOs and Alien Life Contact: Have They Visited Us Before?