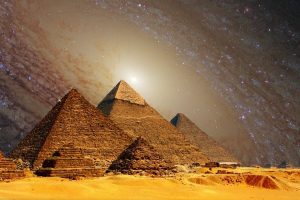 Japanese researchers will perform new scans in an attempt to confirm that a secret chamber is real, reports asahi.com.

Ascending 146 meters into the sky, this last surviving wonder of the ancient world, which has been standing in the Egyptian desert for 3,800 years, continues to remain as steep in mystery today as when ancient travelers first looked up at its time-worn stonework and wondered what secrets might lie inside.

Rumors have circulated in more recent years indicating that within the pyramid there could be a huge secret chamber-a room that has remained unopened since ancient times.

Scans of the structure by an international team of Nagoya University researchers and the High Energy Accelerator Research Organization in 2017 seemed to prove that this was the case, however much doubt has always surrounded those findings

Now, in a fresh bid to determine once and for all whether there is really a secret chamber in the Great Pyramid, the Egyptian government has enlisted the help of Sakuji Yoshimura-president of Higashi Nippon International University in Iwaki, Japan-to verify the discoveries of the past.

To this end, a team of researchers will soon be heading to Egypt to use muon radiography to perform new structure scans-a method that is a bit likex-ray imaging.

The newly developed muon detector will be working inside the Queen’s Chamber for one month to create a picture of what lies behind the walls of the pyramid.

“The previously discovered cavity is way too large from an archaeological perspective,” said Yoshimura. “We are very keen to verify the findings.”

The project is due to end in the summer and the findings are expected in the autumn.

What else can the pyramid hide within itself? We’ll find out soon.