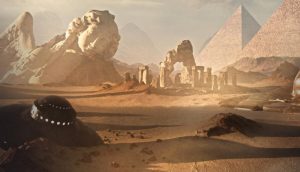 Evidence against our current version of history keep piling up and yet authorities refuse to revise it. Is it possible that they are hiding something?

Our past is riddled with mysteries of ancient civilisations. Most if not all of these mysteries defy our current version of history and have potentially profound effects on our beliefs on life.

According to many experts, we have reached the point where evidence showing a totally different version of history can no longer be denied. Interestingly, mainstream scientists and related authorities seem to be unreasonably stubborn towards even inquiring into the matter and even go to labeling them as mere fantasies.

The theory gaining more and more momentum throughout the world, is known as the ancient astronaut theory recently made even more popular by the Ancient Aliens series on the History Channel.

Erich Von Daniken – The Father of the Ancient Astronaut Theory

The Ancient Astronaut theory, was made popular by Erich Von Daniken in his best selling book Chariots of the Gods published in 1968. A devout Christian, Von Daniken questioned whether the heavenly figures depicted in the ancient religious texts including the Bible were actually fully fleshed aliens who simply posed themselves as Gods to our ancestors.

It goes without saying that his theories rocked the world of archaeology and the church, not to mention that Von Daniken has experienced the wrath of Christians all around the world.

While there are many arguing the validity of the Ancient Astronaut theory, there is no denying that much of what has been accepted as our history does not correlate to an array of findings.

Findings such as the Antikythera device found in 1900 by divers has puzzled historians. The device is believed to be over 2000 years old and contradicts the level of knowledge of the people living at the time.

The experts have compared the complexity of the device to a modern day Swiss watch. They have found that the Antikythera device can be used for astronomy as well as astrology purposes and believed to have been made by the ancient Greeks.

Considering that Antarctica is covered under a mile of ice, experts believe that the map must have been drawn from an aerial view some time before the last ice age, which is millions of years ago when the continent was ice-free. Also, the map shows mountains and rivers yet to be discovered at the time with a great level of accuracy.

While the Antikythera device and the maps give us a glimpse of what existed in the past, the remains of ancient sites give us a clearer vision of the level of ingenuity of our ancestors.

The astounding thing about Puma Punku is not only the size of the megalithic interlocking blocks estimated to be around 40 – 50 tons each but also the designs on the blocks suggesting the use of modern equipment.

The Mystery of the Carnac Stones

In the French city of Carnac, there are lines of thousands of megalithic granite stones nicknamed the Carnac stones. The stones vary in size weighing from 50 t to 350 t each, all standing upright. No one knows who erected these stones and for what purpose. It is believed they were built somewhere around 4500 BC to 2500 BC, towards the end of the Stone Age.

The interesting fact is that when looked from the sky, the stones seemed to be arranged in geometric patterns. The distance between each line is exactly the same i.e 2,860 m apart. The Carnac stones site defies historical records as it provides evidence of urban civilisation dating back to 10,000 years ago.

Ancient Texts Depicting the Union of Gods and Human Females

While the megalithic structures and ancient artifacts reveal the possibility that we may have had alien visitations in the past, ancient texts such as the Hindu Sanskrit suggests that the human race itself could have descended from the extraterrestrials who ruled during the ancient times.

Ancient texts all around the world speak of the union between Gods and human females such as the ancient Hindu text, the Mahabharata, where Queen Kinti mated with the Sun God to give a son named Karna. In Greek Mythology, Hercules and many others are progeny of God fathers and human mothers.

There are also accounts in the ancient texts such as the Bible speaking of virgin births, believed to be abduction and insemination experiments with the humans by the aliens.

It is to be noted that there is no direct link between humans and monkeys. Much of human’s and monkey’s DNA might be similar however that man evolved from the ape is an unproven theory not a fact. Another fact all historians agree upon is that sometime around 3000 BC, the human race took a quantum leap into the Megalithic era during which according to the ancient texts, humans say Gods gave them knowledge.

The Far Reaching Consequences of the Ancient Astronaut Theory

The ancient texts speak a lot about wars in the heavens, which have been interpreted as extraterrestrials fighting each other. We have long looked at each other as divided and different so perhaps the emergence of common enemies whether physically or not, is what will finally unite the world bringing an end to the manipulation and the domination of those in power.

The Rejection of the Ancient Astronaut Theory Does Not Add up

It makes no sense that with so much evidence contradicting our version of history, evidence having deep repercussions in almost all areas of society, authorities are not willing to investigate further.

If the official version of the past were to change, the biggest shift will undoubtedly come from religious organisations across the globe and this alone will affect millions if not billions of people.

Graham Hancock, one of the most prominent authors in ancient mysteries, who has personally travelled around the world visiting ancient sites for his work, has concluded that “the more one investigates the past, the more our current understanding of it begins to sound like a fairy tale.”

What most people are yet to realise is that much of our history, is very much left for interpretation with no hard evidence pointing squarely in one direction and the interpretation we have adopted as official, is not the most evident according to many independent archaeologists.

Are We Mistaking the Intent of Authorities?

When someone makes decisions that are clearly illogical towards achieving a positive outcome, the intent has most likely been mistaken. So far, we believe that authorities are there to give us the truth and what if we are wrong about them?

According to the accounts of several whistleblowers such as Phil Schneider, there are ancient alien installations deep underneath the Earth still inhabited by aliens. In his case, he encountered Grey aliens. Others like Aaron Mccallum, give us an insight of what authorities know about aliens and alien technology. Could the hiding of this alien world from the public be what this rebuffing of evidence is all about? From this angle, it does look like it.