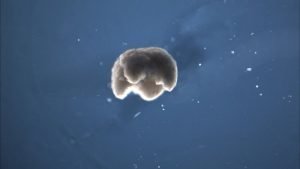 Scientists have managed to create robots that are made from live animal cells instead of metal and plastic, reports theguardian.com.

This significant achievement comes from the courtesy of roboticists in the U.S. who used African clawed frogs skin and heart cells to produce robots capable of moving around all on their own.

“These are entirely new lifeforms,” said Michael Levin from the Allen Discovery Center at Tufts University in Medford, Massachusetts. “They are living, programmable organisms.”

Such tiny robots measure less than 1 mm in length and are based on designs produced by a supercomputer which churned out and tested hundreds of possible 3D configurations.

“The aim is to understand the software of life,” said Levin.

“If you think about birth defects, cancer, age-related diseases, all of these things could be solved if we knew how to make biological structures, to have ultimate control over growth and form.”

While the research’s possible scientific and medical benefits are obvious some scientists have raised questions about the ethics of working with what are essentially new forms of life.

“At what point would they become beings with interests that ought to be protected?” said Thomas Douglas from the Oxford Uehiro Centre for Practical Ethics.

“I think they’d acquire moral significance only if they included neural tissue that enabled some kind of mental life, such as the ability to experience pain.”

Be warned. If the rise of the robots occurs, the end may be a more squelchy affair than we have been prepared by science fiction writers.