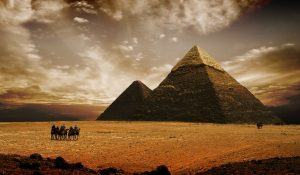 A group of archaeologists discovered in the famous pyramid of Cheops some system that allows the delivery of messages. This is a network of mini tunnels with gate valves.

Interconnected passages worked as an acoustic system: by changing the position of the valves, it was possible to transmit messages over long distances. The system was most likely used for ritual purposes and during the construction of the pyramids.

It is worth noting that scientists have known about such tunnels for a long time. Only they assumed that the tunnels were needed for ventilation. Archaeologists from Poland, led by Sapkowski, solved the mystery.

Specialists made several gate valves made of wood and inserted into special grooves. As a result, it turned out to transmit the sound to the desired point.

It is possible that it was through tunnels that priests relayed messages to other participants in the esoteric ritual.

There is a network of tunnels in other pyramids, therefore, researchers are just starting their work. Maybe soon experts will get to the bottom of the truth.