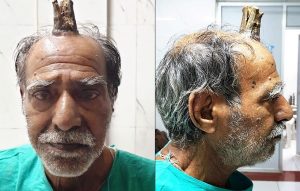 In 2014, an elderly farmer, Shyam Lal Yadav from the village of Rahli, India, hit his head hard, which caused a lump on his forehead.

Usually these lumps eventually pass, but for a 74-year-old Indian, it began to become bigger and bigger.

When something dark and hard broke through the skin and began to grow in height, Yadav was afraid that he had a “devil’s horn” growing and began to beg barbers to cut it.

However, no one dared to undertake such an operation, and in the meantime, the horn continued to grow in height. The old man himself tried to cut it while it was still small, but this did not stop the growth of the horn. 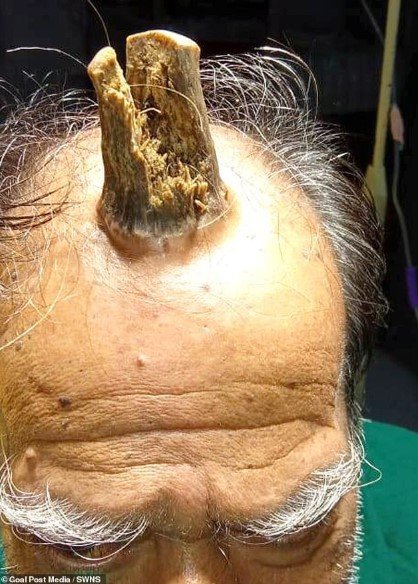 When the horn reached a height of 10 cm and it was already impossible to hide under a hat, Yadav finally decided to go to the hospital.

They found out that the horn consists of keratin, the same substance that nails and hair are made of. In older people, a similar “horned” anomaly is sometimes found, but it is not yet possible to predict which factors cause it.

Doctors performed an operation and removed the entire horn with a piece of skull skin. A biopsy confirmed that this is not a malignant tumor. Now an elderly patient is recovering after surgery, but doctors cannot say whether the horn will grow again or not.