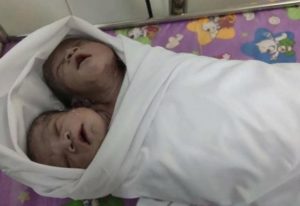 The two-headed baby was born on the evening of September 16 in Myanmar. It was a shock for all the doctors in the hospital, they had never seen anything like this in their work.

For Sanda Mying, this is already the second child, the first was born completely normal. The mother knew nothing that she was carrying a child with two heads.

She was admitted to the hospital with painful contractions when she was eight months pregnant. When she began to give birth, the baby’s heads got stuck in the pelvis, and only then did the doctors realize that something was wrong with the baby. After that, they decided to have a cesarean section.

According to the Myanmar Times, the baby is male and with the exception of two heads, the rest of his body is completely normal, like a normal baby. He has only one set of arms, legs and genitals, and the internal organs are also not doubled.

“Apart from the extra head, the baby is completely healthy. I have seen Siamese twins, but this is the first time I see a child with two heads,” said the director of the Tatkon clinic in the capital of Myanmar – the city of Naypyidaw.

The unusual baby and his mother were taken to the children’s hospital in the neighboring town of Ottaratiri the next day after giving birth, as the boy needed special care.

The mother of a two-headed child lives in a small village, which explains that she was not seen by a gynecologist and did not do an ultrasound.