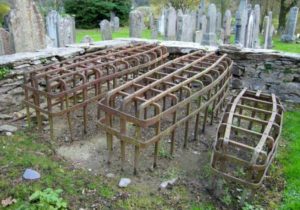 A quick search of the internet and you will soon come across many sites claiming these images of iron cage graves were used to keep zombies and vampires from escaping from their final resting place. This claim however is not true, even though the first few pages of Google will probably tell you otherwise.

They are in fact mortsafes, and were designed in the 18th century with the sole purpose of protecting graves from resurrectionists (body snatchers). Grave robbing was a serious problem at the time, particularly around the medical schools of Scotland, and resurrectionists had supplied the schools of anatomy in Scotland since the early 18th century.

This was due to the necessity for medical students to learn anatomy by attending dissections of human subjects, which was frustrated by the very limited allowance of dead bodies at the time, usually these were the corpses of executed criminals.

The authorities tended to turn a blind eye to the grave robbing because surgeons and students were working to advance medical knowledge, and subsequently they kept publicity to a minimum to prevent people from realising what was happening.

Men were employed to steal bodies and transport them from place to place, even across the sea, for sale to medical schools. When it became public knowledge that this was going on, people were determined to protect the graves of newly deceased friends and relatives. 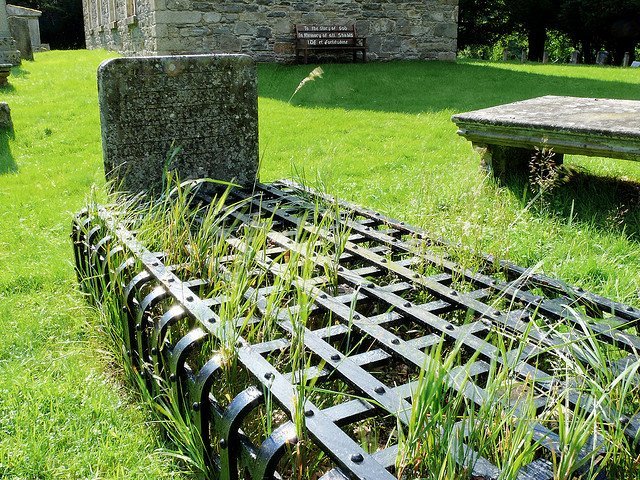 The rich could obviously afford heavy tombstones, vaults, mausoleums and iron cages around graves. The poor began to place flowers and pebbles on graves to detect disturbances. They dug heather and branches into the soil to make disinterment more difficult.

Large stones, often coffin-shaped, sometimes the gift of a wealthy man to the parish, were placed over new graves. Friends and relatives took turns or hired men to watch graves through the hours of darkness, and in some cases watch houses were sometimes erected to shelter the watchers.

The mortsafe was invented in or around 1816. These were iron or iron-and-stone devices of great weight, in many different designs. Often they were complex heavy iron contraptions of rods and plates, padlocked together – examples have been found close to all Scottish medical schools.

A plate was placed over the coffin and rods with heads were pushed through holes in it. These rods were kept in place by locking a second plate over the first to form extremely heavy protection.

It would be removed by two people with keys. They were placed over the coffins for about six weeks, then removed for further use when the body inside was sufficiently decayed that they would be of no use to medical students and therefore of no interest to grave robbers.

The case of Burke and Hare only heightened Scottish fears of grave robbing, after they were found to have been responsible for the murders of 16 people, solely for the purpose of selling their victims bodies to the medical school at Edinburgh University.

Many more pyramids are hiding in the sand – Why are they not excavated?

People Can Lose Their Memory For Unknown Reasons