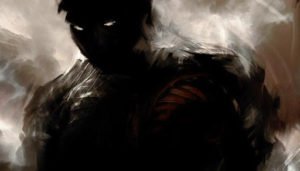 Bob LeDuc (other sources give the name Jim Miller, possibly a pseudonym) had dropped off his girlfriend after a party. He turned off U.S. 97 and began the familiar journey home along Pumphouse Road which runs along the northern slopes of Toppenish Ridge.

The gravel road was dark, without any streetlights. A mile up the road, Bob was surprised to see in his headlights a roan cow and her two calves’ beelining it toward him.

The cow was bawling and looking back over its shoulder, apparently to make sure that one of the calves was following. Something had frightened the animals. Bob slowed his truck to avoid hitting them.

Moments later, as he neared the top of a small rise, he saw three figures standing on the left side of the road. He wondered if they were travelers in trouble. The boy reduced his speed, ready to help.

Suddenly one of the figures, standing in the ditch on the side of the road, bounded out onto the road in a 15-foot, floating, slow-motion stride to a point just past the center of the road. The figure, apparently a man, was about seven feet tall. He slowly put his arms above his head.

An uncomfortable feeling descended over Bob. He decided it was best to continue on. The truck approached within several feet of the figure, and Bob saw that the man was extremely thin and wore tight black clothing with white bands at each wrist and ankle.

A white trapezoid, as if an insignia, was on his chest, and black boots or similar footwear was on his feet. The man had a very long face and a long, pointy nose. The skin on the face was very white, as if covered with flour.

The upper lip appeared to be pulled back in a permanent snarl, and fine teeth were visible. The lower lip was either missing or very small. The man’s shoulder-length hair was brownish, reddish-blond and very matted and stringy.

The fingers on both of the man’s bare hands were long, and the creature grasped something purple in his left hand. The thing had a wire on it, which appeared to run down the creature’s arm. Bob noticed that the other two individuals remained close together at the side of the road. They were wearing the same kind of clothing, complete with white markings.

Completely frightened, Bob swerved around the figure. As he did, the giant turned sideways, never moving his arms nor changing expression. Bob tore off up the road and into the darkness. He had the urge to look into the rearview mirror but was too frightened.

He drove as fast as he could. A few moments later, an elongated lighted object appeared behind the truck. It blinked on and off several times.

Shortly, the inside of his truck and a 10-foot area around the vehicle were flooded with light as if the dome light had been turned on. The intensity of the illumination masked the instrument panel lights and revealed dead insects stuck to the windshield.

Out of the corner of his eyes, Bob saw a shadow in the seat to his right. He intuitively knew that the figure was that of a close male friend his own age; he recognized the shape of the friend’s head and his familiar coat.

As Bob drove madly home, a woman’s voice spoke in his head, “Drive recklessly because they can’t afford for them to be the cause of you getting hurt.” Bob’s passenger turned his head and looked at Bob then leaned forward and looked up at the light pouring in through the windshield.

He then leaned back, wiped his eyes, leaned forward as if to stand up, and vanished. The light disappeared, and a sick feeling came over Bob that someone had died.

The boy reached home and ran inside and awakened his parents, who could see that he was quite frightened. An interesting fact is that Bob learned the morning after he encountered the giants that a friend who resembled the passenger in his car had died the night of the encounter in a violent shooting.