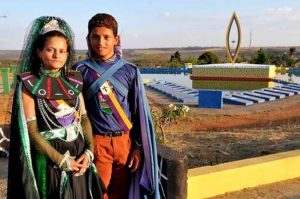 This is the story of a place founded in 1959 by a poor and analphabet woman from the Brazilian coast who not only was the first lady to become a professional truck driver in her country, but also created a religion which unites elements of Catholicism, Spiritism, Egyptian Mythology, Hinduism, Indigenous beliefs and ufology.

Tia Neiva (or “aunt Neiva”) founded Vale do Amanhecer (Valley of Dawn in English), a place of 22 hectares in the state of Goiás, in the heart of Brazil, where thirty thousand people work and live to maintain a temple that help hundreds of people cure their spiritual and physical problems daily, with the help of spiritual entities that assist in the healing process.

Whoever goes to Valley of Dawn has the impression that this place belongs to another galaxy. Adepts of this religion believe that they are reincarnations of extraterrestrials and therefore, they dress as if they were in their original planets.

Their clothes are colorful, bright and full of details and symbols. Women wear long dresses with veils and sparkling hoods, men wear pants, hoods and boots. 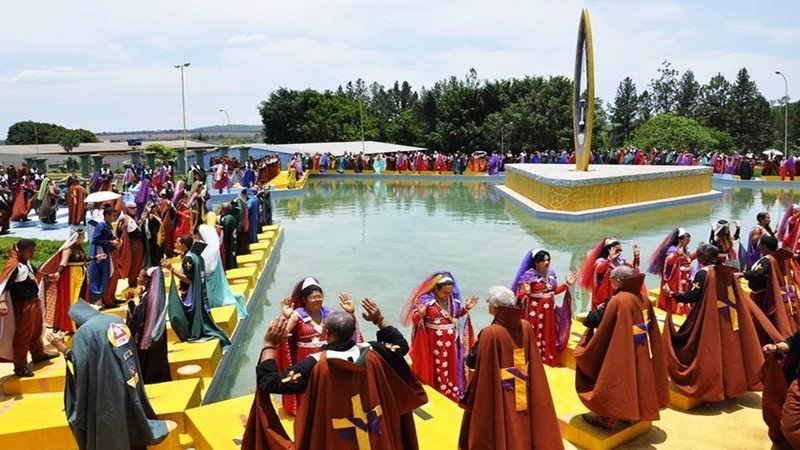 The clothes resemble medieval garments, only with much brighter colours. Each model of garment corresponds to a different kind of extraterrestrial ability and a different position in a hierarchical model.

Each group identified by a different style of clothes has a a function inside the temple – some of them incorporate the spirits, others walk around singing and praying in order to mantain the energetic harmony of the place, others magnetize the water and others organize the crowd.

Valley of Dawn – Beliefs and Practices

Every day, the temple opens its gate at ten a.m and the mediums start to invoke the assistance of spiritual guides – entities that live in the spiritual realm but come to the temple to help the population.

Through the many mediums that work in the Valley, the spiritual guides clean the auras of many people, perform healings and guive them spiritual counselling. The whole process can take many hours and sometimes the workers of the temple will not leave until midnight, when the last person is released.

All this service is completely free and the Valley does not accept any kind of payment or even donations.

Adepts of tia Neiva’s religion believe that spiritual entities can help people heal by using scented smoke, bath of flowers, aura cleansing and energy harmonization. The temple is built specifically for this purpose, so each room is designed to optimize the cure.

During the process, women sing religious hymns, many prayers are said and workers worship different entities – from Egyptian gods to Catholic saints.

Among the many different kinds of spirits that the people of the Valley of Dawn invoke, are those of the dead African slaves brought to Brazil during the colonization.

The African religion was very knowledgeable about the illness of the astral body, so the mediums incorporate these slaves so that they can see and feel the patients’ conditions and help them accordingly.

At the entrance of the gates of the Valley of Dawn there’s a huge image of Jesus, who the adepts believe to be a great master of wisdom come from a superior planet to guide the earthlings.

Inside the temple there are images of intergalactic princesses, indigenous figures and Egyptian deities, as well as African slaves who assist in the temple. A Christian cross is side by side with a six pointed star and the symbols of Indigenous beliefs.

A few meters from the temple, a pyramid indicates where patients should go in order to be cured by extraterrestrials.

Despite the apparent polytheism, this religion follows a monistic approach that is common to many belief systems (but often misinterpreted) in which all different deities and gods are seen as facets of only one supreme God. The many inhabited planets are God’s creation just like the entities that help in the temple.

The only difference between the various forms of gods is the level of consciousness – while spirits of dead people belong to a lower level in the hierarchy of degrees of consciousness, Jesus and other figures correspond to higher degrees. All of them, however, have a specific role in nature.

The Valley of Dawn has adepts in different countries, like Japan and USA, even though they are much smaller in numbers outside South America. The Valley of Dawn in Planaltina, Brazil, is open to the public every day and all visitors are welcome, even the curious ones.

There are restaurants, bars, drugstores, supermarkets, hostels and everything that a city should have. It is possible to spend many days in the Valley enjoying the eccentricity and friendly hospitality of this adorable group that despite the poverty, dedicate their lives to help those who need spiritual guidance, without anything in exchange.

The Case for a Divine Cause: The Cosmological Argument for God