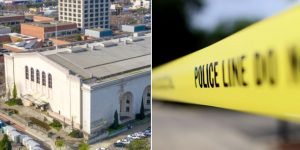 Builders discovered a mummified human body while renovating a 100-year-old convention center in Oakland, California, USA. The identity of the man and the circumstances of his death have not yet been established.

On March 9, 2022, a construction team working on renovations at the large Henry J. Kaiser Convention Center building in downtown Oakland, California suddenly stumbled upon a mummified corpse embedded in a wall.

The plot, as if taken from a crime series, became even stranger when it turned out that the immured body did not belong to the times of mafia showdowns (such versions immediately appeared on social networks), but relatively new, it lay in the wall for no more than 3-5 years.

There is very little information on the case so far. Neither his identity nor how this man died is known.

“No obvious or unnatural injuries were found to indicate a violent death, in addition, his hands, feet and other parts of the body were not bound. Based on the position in which the victim’s body was found, this tragic death is most likely an accident caused by positional asphyxia due to compression in a small space,” said Lieutenant Frederick Chavis of the Auckland Police.

The body was found behind sheets of drywall in a 38 cm wide cavity, according to the Oakland Police Department.

How this body could get into the cavity behind the drywall, why no one missed this man when he disappeared, and how no one smelled the decomposition of the remains, is not indicated.

The Henry J. Kaiser Convention Center in Oakland, near San Francisco, opened in 1914 and is quickly a historical landmark. The auditorium where the body was found was once a famous venue for performances by artists and speakers, including Martin Luther King Jr., Elvis Presley and the Grateful Dead.

The building has been vacant in recent years after the city decided it was too expensive to maintain. Auckland Council approved a plan to redevelop the building in 2015 and planned to reopen it as a performing arts and commercial space.

Investigation and identification of the victim is still ongoing, but officials determined it was an adult male based on bone structure and anatomy. The coroner will rely on dental records and possibly preserved fingerprints to find out who the person is, but other identifiers, including age or race, may not be immediately recognizable.