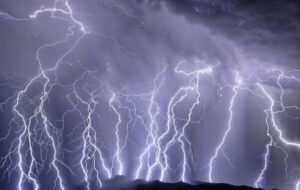 A rare siege of Arctic lightning zapped ice north of Alaska. 1600 lightning strikes hit the Arctic within hours… The National Weather Service estimates the event occurs once or twice per decade…

The National Weather Service in Fairbanks, Alaska, confirmed early Tuesday, that a freak Arctic thunderstorm had occurred Monday evening, producing between 100 and 200 lightning strikes as an exceptional pulse of heat visited Alaska’s North Slope, over the Beaufort Sea east of Point Barrow.

What made Monday’s storms so unusual, however, is just how far north the storms ventured — well north of Prudhoe Bay, directly over sea ice. The Weather Service in Fairbanks estimates that thunderstorms like that may develop so far north only once or twice every decade.

But this is just the beginning… Additional storms were erupting in the Chukchi Sea east of Russia and Siberia on Tuesday evening, drifting toward northern Alaska and Point Barrow once again.

Overnight into this morning, a strong front sweeping south from the Arctic along with warm air from Siberia and the cold waters of the Chukchi Sea together created this unusual occurrence for lightning to develop over the Chukchi Sea. #akwx #lightning pic.twitter.com/KUBImL3U40

Vaisala, a company that operates a Global Lightning Detection Network, has picked up about 1,613 lightning events north of Alaska and in far Northwest Canada since 5 a.m. Monday, according to Chris Vagasky, the firm’s lightning solutions manager. About 1,210 of those were cloud to groundstrokes or, in many instances, cloud to ice.

Vagasky wrote in an email that high-latitude lightning by itself isn’t that rare, and that lightning storms routinely move off Alaska over the Arctic Ocean. But he said it was unusual for there to be such an unstable air mass over the Arctic Ocean generating its own lightning. “That’s what made this case more unique,” he wrote.

High latitude #lightning isn’t uncommon in the summer months, usually as convection develops over land and moves over the Arctic Ocean. In this case, it looks like several storms developed over the ice. #AKwx https://t.co/HPZxy7cK8V pic.twitter.com/dziR5wtscv

Scientists around the world have shown that the High-frequency Active Auroral Research Program (HAARP) was developed to modify weather and control people’s minds… Here a few examples:

Physicist Bernard Eastlund claimed that HAARP includes technology based on his own patents that has the capability to modify weather and neutralize satellites.

A Russian military journal wrote that ionospheric testing would “trigger a cascade of electrons that could flip Earth’s magnetic poles”.

Former Governor of Minnesota, ex-professional wrestler, and documentary maker Jesse Ventura questioned whether the government is using the site to manipulate the weather or to bombard people with mind-controlling radio waves. An Air Force spokeswoman said Ventura made an official request to visit the research station but was rejected. “He and his crew showed up at HAARP anyway and were denied access.”

Nick Begich Jr., the son of the late U.S. Representative Nick Begich and brother of former U.S. Senator Mark Begich, is the author of Angels Don’t Play This HAARP. He has claimed that the HAARP facility could trigger earthquakes and turn the upper atmosphere into a giant lens so that “the sky would literally appear to burn.” He maintains a website that claims HAARP is a mind control device.

Michel Chossudovsky stated in a book published by the Committee on Monetary and Economic Reform that “recent scientific evidence suggests that HAARP is fully operational and has the capability of triggering floods, hurricanes, droughts and earthquakes.“

HAARP has also been proposed as a cause of low frequency background hums said to be heard in various places around the world.

So could those 1,600 Arctic lightnings be a result of a HAARP test or attack?

A disc-shaped UFO flew demonstratively during a news release