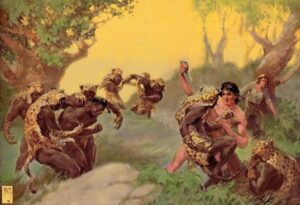 In West Africa, particularly in Nigeria and Sierra Leone, a leopard cult has existed for many centuries, wherein its members, believing that they have shape-shifted into leopards, kill by slashing and mauling their human prey with steel claws and knives.

And then, they drink the blood and eat the flesh of human victims as if they were truly in the form of leopards. The cultists believe that a magical elixir known as borfima, which they brew from boiling their victim’s intestines, grants them superhuman powers and enables them to transform themselves into leopards.

The Bati Yeli also known as the executioner, wears the ritual leopard mask and a leopard skin robe. It is customary that the sacrifice is performed at one of the Leopard cult’s jungle shrines, but if circumstances demand a more immediate shedding of blood, the rite may be conducted with the ceremonial two-pronged steel claw anywhere at all. 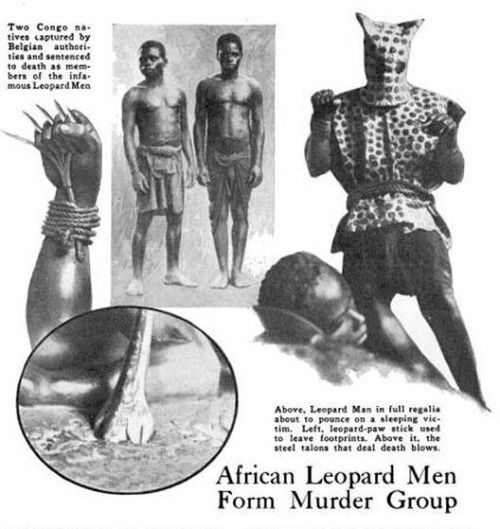 Those who believe that they can shape-shift into leopards by drinking human blood and eating human flesh have fallen victim to spiritual parasites that require human sacrifice.

In the 1930’s members of the Anyoto tribe belonging to a secret society of leopard men went on a killing spree in the Belgian Congo. Dressed in costumes of bark painted with black and yellow spots they stalked their enemies in the jungle slaughtering them with claw-shaped knifes.

The first serious outbreak of leopard-cult murders in Sierra Leone and Nigeria occurred shortly after World War I. Many of its members were captured and executed, and the white administrators believed that they had crushed the cult. However, the leopard men simply went underground, continuing to perform ritual murders sporadically every year over the next two decades.

Early in 1947, when District Officer Terry Wilson discovered that leopard men had begun killing young women in his jurisdiction, he raided the house of a local chief named Nagogo. In the chief’s dwelling, Wilson found a leopard mask, a leopard-skin robe, and a steel claw. 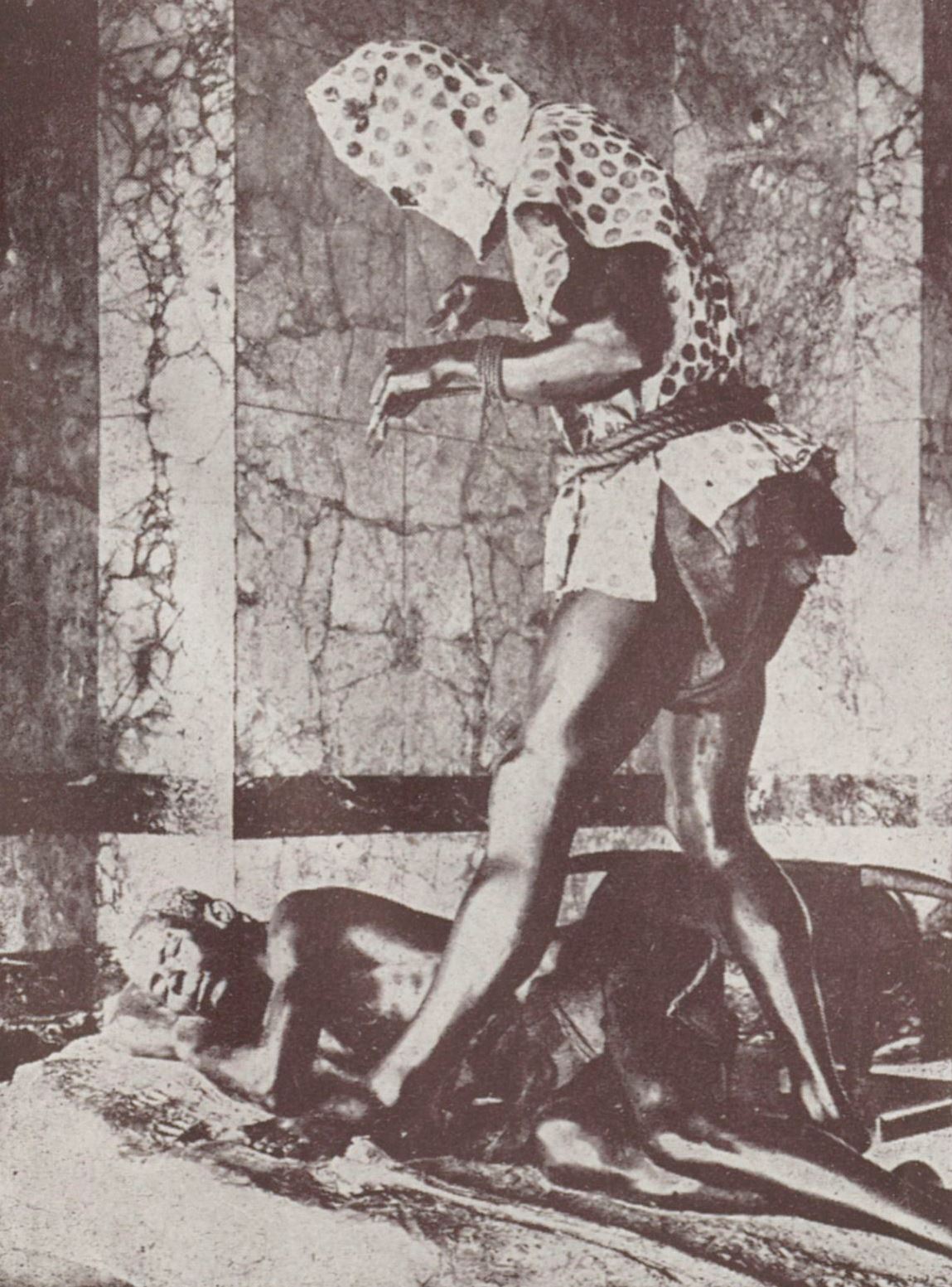 Acting on a tip from an informer, Wilson ordered his police officers to dig near the chief’s house, where they found the remains of 13 victims. The chief was put in prison to await trial, and Wilson set out on a determined mission to squelch the leopard men’s reign of terror.

The native inhabitants of the region lost all confidence in the police and their ability to stop the killings by the powerful leopard men. Even some of Wilson’s men had come to believe that the cultists truly possessed the ability to shape-shift into leopards and to fade unseen into the shadows.

One night in mid-August 1947, Wilson and his 12 men hid in the jungle. And he ordered one of his best men walk on the path to a village where several slayings had taken place. However, his plan was ruined when a tall man in leopard robes charged at him with a large club.

But before Wilson and the other officers could arrive on the scene, the cultist had smashed in the officer’s skull and fled into the bushes.

District Officer Wilson had lost one of his best men, but as he was about to have some officers take the constable’s body to the compound he had a sudden hunch that the attacker might return to the scene of the crime. When the other officers left to search the neighboring villages, Wilson hid himself behind some bushes overlooking the trail. 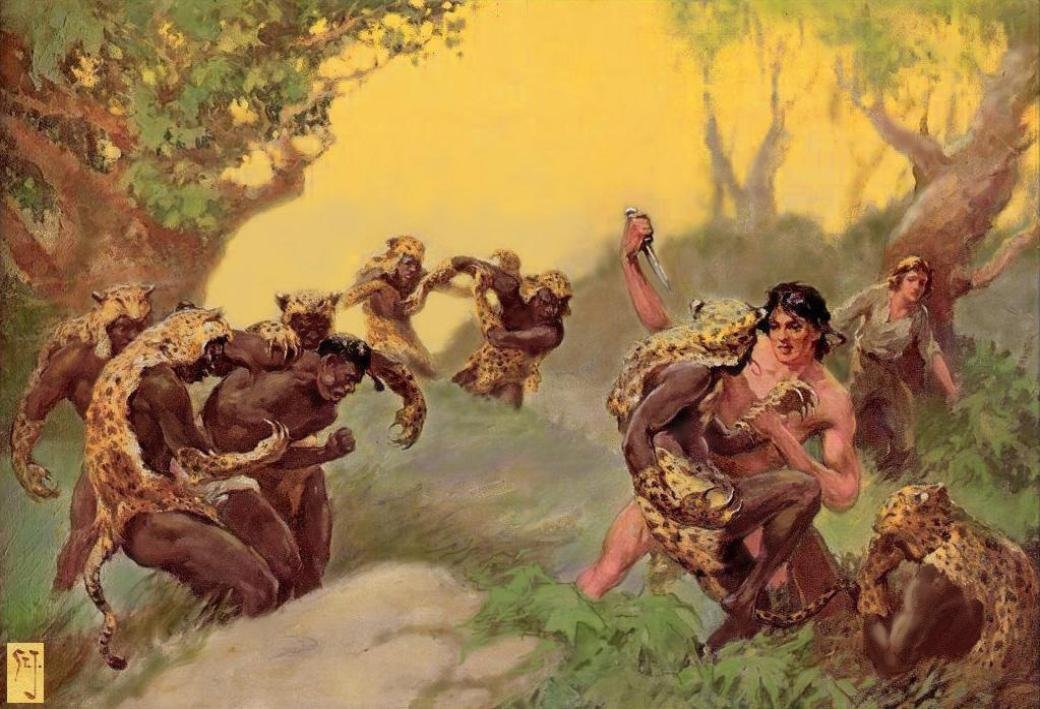 Around midnight, a nightmarish figure crawling on all fours emerged from the jungle, leaped on the young constable’s corpse, and began clawing at his face like a leopard. Wilson caught the glint of a two-pronged steel claw in the moonlight. The leopard man had returned to complete the cult ritual of sacrifice.

When Wilson advanced, the robed cultist snarled at him as if he were truly a leopard. When he came at him with the two-pronged claw, immediately Wilson shot him in the chest.

It’s obvious that they were only men, not invincible supernatural beings. Witnesses began to come forward in great numbers with clues to the identity of cult members and the possible location of a secret jungle shrine.

The shrine itself was found deep in the jungle, hidden and protected by a large boulder. The cult’s altar was a flat stone slab that was covered with dark bloodstains. Human bones were strewn over the ground. A grotesque effigy of a half-leopard, halfman towered above the gory altar.

In February 1948, 73 initiated members of the cult were arrested and sent to prison. Eventually, 39 of them were sentenced to death and hanged in Abak Prison. Their executions were witnessed by a number of local tribal chiefs who could testify to their villages that the leopard men were not immortal.

Although the defiant strength of the leopard men was broken in 1948, inhabitants of the region are well aware that the cult still exists as a secret society with a shrine hidden in the jungle.

Sources: Real Vampires, Night Stalkers and Creatures from the Darkside by Brad Steiger; The Gale Encyclopedia of the Unusual and Unexplained by Brad Steiger and Sherry Hansen Steiger