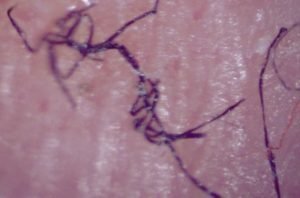 Imagine a disease that causes its victims to have the sensation of something crawling and biting them under their skin, skin lesions that erupt spontaneously, and having them form a film that keeps the from healing.

Mysterious blue, black, or red fibers and granules begin to grow under your skin and extrude from it. Then add on mental side effects, like: Attention Deficit, Bipolar, or Obsessive-Compulsive disorders. It all begins to sound like the basis of a science fiction story similar to Michael Crichton’s The Andromeda Strain.

For over a decade, people around the world have been experiencing these very symptoms after contracting a mysterious disease known as Morgellons. The disease is shrouded in controversy; primarily due to the medical community’s reluctance to investigate anything associated with the taint of fringe science.

Eventually, scientists examined the specimens from victims; particularly the mysterious blue, black or red fibers and granules. The results of laboratory tests on these fibers were unexpected and extremely strange. The fibers match no known synthetic or natural fiber and can withstand temperatures up to 1400° F.

This strangeness, along with the medical community’s reluctance to examine the claims, has fueled several conspiracy theories, including: chemtrails, nanotechnology, extraterrestrial organisms, alien tampering, and genetic modification.

This theory posits that the contrails left by jet aircraft are the results of dumping chemicals into the air for some unknown agenda. The government maintains that what people see are ordinary water vapor trails formed from the exhaust.

This idea maintains that Morgellons is secret nanotechnology that has inadvertently invaded human tissue. Theorists believe this nano was developed to be a self-replicating, information gathering device, though it is unknown what kind of data these machines are gathering.

Strangest of all, some internet sites that support the nanotechnology theory claim to discern writing on the fibers.

Believers of this reason claim that the disease is of extraterrestrial origin. This may seem a bit farfetched until you consider the possibility of lithopanspermia.

Lithopanspermia describes a scenario of interplanetary transport of microorganisms by use of meteorites. Many scientists now believes this is how life first appeared on Earth. 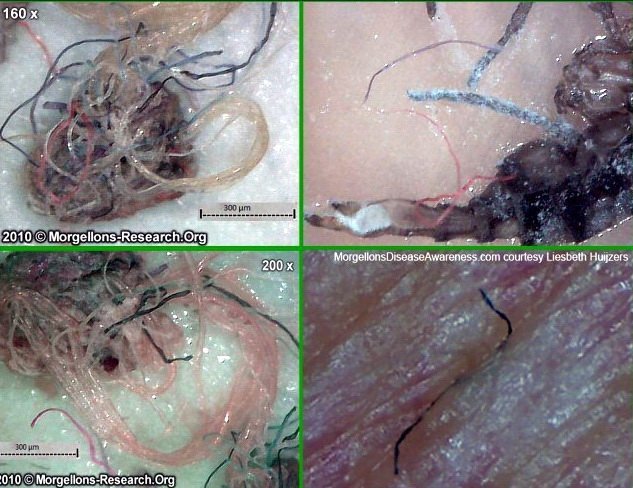 Some think that Morgellons may be related to grey aliens. Grey aliens are the most accepted form of extraterrestrials, with large heads and sexless bodies. They are at the core of paranormal culture and people speculate that they’ve been abducting humans for years in an effort to gain additional food and resources.

More extravagant stories suggest that the US government made deals with them during the Roswell incident, allowing them to use Americans as guinea pigs in exchange for weapons. A few speculate that Morgellons is a rare side effect of alien implantation.

Essentially an implanted monitoring chip has malfunctioned, spreading DNA altering materials. The government then prevents the health industry from releasing true information about it, because they would have to admit to alien life and their wrongdoing.

Agrobacterium is a bacteria responsible for causing tumors on plants. Much like cancer in humans, it has the ability to destroy cells and permanently alter DNA. This bacteria is now used to genetically engineer crops, such as: corn, soybeans, canola, sugar beets, alfalfa, and many more.

The desired DNA is injected into the bacteria, and the resulting infection is allowed to run rampant in the plant host.

Since the beginning of this practice in the 1980s, many concerns have been raised about introducing genetically modified crops into nature. However, very little attention has been placed on the actual agent of change.

This neglect may be due to the fact that agrobacterium is only considered a concern for plant-life. What people don’t realize is that agrobacterium can be responsible for infections in humans as well, especially those with weakened immune systems.

The connection between agrobacterium and Morgellons was shown when Vitaly Citovsky, a professor of molecular and cell biology at Stony Brook University in New York, conducted a study of Morgellons patients. 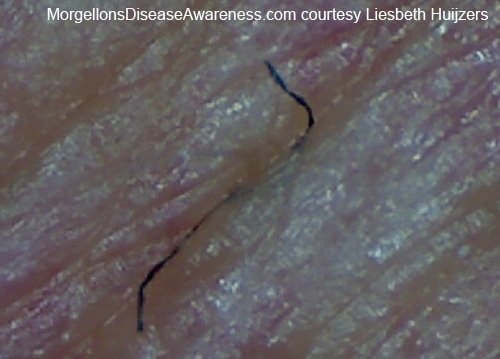 All of the Morgellons patients tested positive for the presence of agrobacterium, while the control group showed no signs of it. Until Citovsky’s discovery in 2007, the CDC and entire medical community dismissed the disease as being a psychiatric condition, and refused to do further research.

In 2008, the CDC began their own study, and in 2012 they reaffirmed their stance that the whole thing was psychological. In spite of these findings, serious research efforts are now being conducted at a number of universities, including Oklahoma State University.

Of all the theories given above, genetic modification is the only one that seems plausible. Unfortunately, Morgellons continues to evade identification and may remain so for quite some time.

Consider this: The cause of AIDS took nearly three years to uncover. This was primarily due to the fact that HIV closely resembled other human T-lymphotropic viruses – causing it to be overlooked. If Morgellons is the result of genetic modification, it may be nearly impossible to distinguish disease cells from normal ones.

Whether you choose to believe Morgellons is caused by aliens, chemtrails, or rouge nanotechnology, you should be frightened by at least one thing in this article: Agrobacterium is capable of infecting and changing human cells if the conditions are correct. It’s possible that the next pandemic may not arise from nature. An accidental, man-made plague is a chilling thought that should keep you up at night.