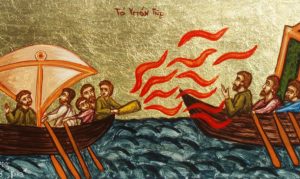 We have developed the modern equivalent of some of these inventions, but only very recently.

The Byzantines of the 7th to 12th centuries hurled a mysterious substance at their enemies in naval battle. This liquid, shot through tubes or siphons, burned in water and could only be extinguished with vinegar, sand, and urine. 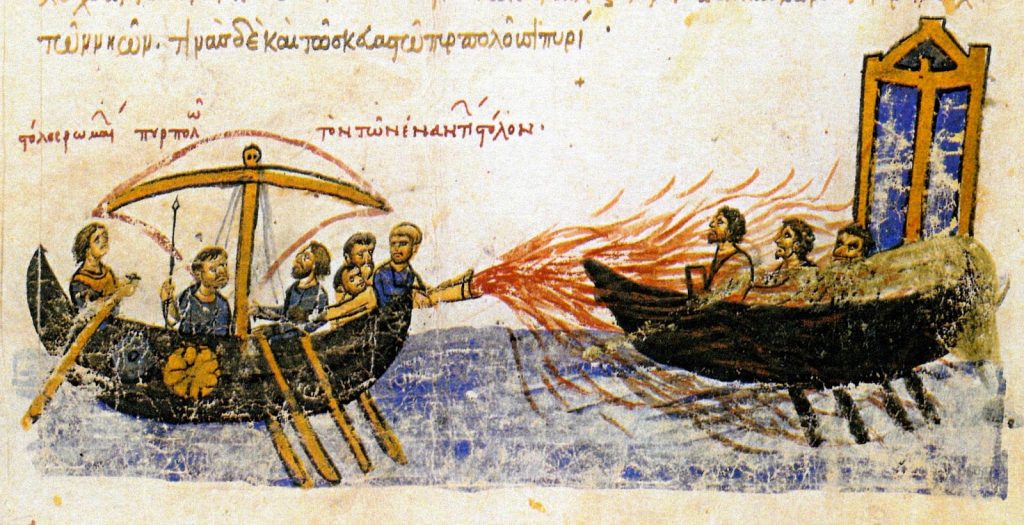 We still don’t know what this chemical weapon, known as Greek Fire, was made of. The Byzantines guarded the secret jealously, ensuring only a select few knew the secret, and the knowledge was eventually lost altogether.

2. Flexible Glass: A Substance Too Precious

Three ancient accounts of a substance known as vitrum flexile, flexible glass, are not clear enough to determine that this substance actually existed. The story of its invention was first told by Petronius (d. 63 A.D.).

He wrote about a glassmaker who presented the Emperor Tiberius (who reigned 14–37 A.D.) with a glass vessel. He asked the emperor to hand it back to him, at which point, the glassmaker threw it to the floor.

It didn’t break; it only dented, and the glassmaker hammered it quickly back into shape. Fearing the devaluation of precious metals, Tiberius ordered the inventor beheaded so the secret of vitrum flexile would die with him.

Pliny the Elder (d. 79 A.D.) told this story as well. He said that, although the story was frequently told, it may not be entirely true.

The version told a couple hundred years later by Dio Cassius morphed the glassmaker into a sort of magician. When the vessel was thrown to the floor, it broke and the glassmaker fixed it with his bare hands.

In 2012, the glass manufacturing company Corning introduced its flexible “Willow Glass.” Heat-resistant and flexible enough to be rolled up, it has proven especially useful in making solar panels.

If the unfortunate Roman glassmaker did indeed invent vitrum flexile, it seems he was thousands of years ahead of his time.

3. An Antidote to All Poisons

A so-called “universal antidote” against all poisons was said to have been developed by King Mithridates VI of Pontus (who reigned 120–63 B.C.) and perfected by Emperor Nero’s personal physician.

The original formula was lost, explained Adrienne Mayor, a folklorist and historian of science at Stanford University, in a 2008 paper, titled “Greek Fire, Poison Arrows & Scorpion Bombs: Biological and Chemical Warfare in the Ancient World.”

But ancient historians told us that among its ingredients were opium, chopped vipers, and a combination of small doses of poisons and their antidotes.

The valuable substance was known as Mithridatium, named for King Mithridates VI.

Mayor noted that Serguei Popov, a former top biological weapons researcher in the Soviet Union’s massive Biopreparat program who defected to the United States in 1992, was attempting to make a modern-day Mithridatium.

Although “Mythbusters” failed to reproduce this ancient weapon and declared it a myth, MIT students succeeded in 2005. They combusted a boat in San Francisco harbor using the 2,200-year-old weapon.

A heat-ray weapon unveiled in 2001 by the Defense Advanced Research Projects Agency (DARPA) used microwaves to penetrate “a victim’s skin, heating it to 130 degrees Fahrenheit, creating the sensation that one is on fire,” explained Mayor.

The vast Roman structures that have lasted thousands of years are testaments to the advantages Roman concrete has over the concrete used nowadays, which shows signs of degradation after 50 years.

Researchers have worked in recent years to uncover the secret of this ancient concrete’s longevity. The secret ingredient is volcanic ash.

An article published in 2013 by the University of California–Berkeley News Center announced that university researchers described for the first time how the extraordinarily stable compound calcium-aluminum-silicate-hydrate (C-A-S-H) binds the material.

The process of making it would create lower carbon dioxide emissions than the process for making modern concrete. Some disadvantages of its use are, however, that it takes longer to dry, and although it lasts longer, it is weaker than modern concrete.

In medieval times, swords made of a substance called Damascus steel were being produced in the Middle East out of a raw material, known as Wootz steel, from Asia. It was perplexingly strong. It wasn’t until the Industrial Revolution that metal so strong would be forged again.

The secret of making the Middle East’s Damascus Steel has only reemerged under the inspection of scanning electron microscopes in modern laboratories. It was first used around 300 B.C. and the knowledge seems to have been inexplicably lost around the mid-18th century.

Nanotechnology was involved in the production of Damascus steel, in the sense that materials were added during the steel’s production to create chemical reactions at the quantum level, explained archaeology expert K. Kris Hirst in an article written for About Education. It was a kind of alchemy.

Hirst cited a study led by Peter Paufler at the University of Dresden and published in the journal Nature in 2006. Paufler and his team hypothesized that the natural properties of the source material from Asia (the Wootz steel), when combined with materials added during the production process in the Middle East, caused a reaction:

“The metal developed a microstructure called ‘carbide nanotubes,’ extremely hard tubes of carbon that are expressed on the surface and create the blade’s hardness,” Hirst explained.

Materials added during the production of Damascus steel included Cassia auriculata bark, milkweed, vanadium, chromium, manganese, cobalt, nickel, and some rare elements, traces of which presumably came from the mines in India.

“What happened in the mid-18th century was that the chemical makeup of the raw material altered—the minute quantities of one or more of the minerals disappeared, perhaps because the particular lode was exhausted.”

The Silurian Hypothesis: Can we find evidence of a prior advanced civilization?

The Ancient Enigma of Ica Stones