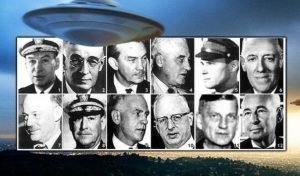 The Majestic 12 conspiracy is commonly regarded as one of the most highly speculative topics in the arena of UFO research. Many ufologists dismiss the conspiracy as an elaborate hoax, while others are convinced that the truth about the Majestic 12 (a.k.a. MJ12) has been shrouded by a convoluted disinformation campaign.

Whether the conspiracy can ever be proven to be real or contrived, it is unique in that it allegedly involved some of the most high-profile figures in the world in the political, scientific, and intelligence arenas.

In 1984, two very peculiar documents surfaced in the UFO community: One dated November 18, 1952, and the other dated September 24, 1947. The first document was an intelligence briefing authored by Rear Admiral Roscoe H. Hillenkoetter and addressed to President-elect Dwight D. Eisenhower.

Each page of the briefing featured a stamp bearing the words “TOP SECRET / MAJIC EYES ONLY.” The second document, which was an attachment to the briefing, was a classified Executive Order signed by President Harry S. Truman and addressed to Secretary of Defense James Forrestal.

This document authorized Forrestal to establish a panel of experts that would be solely answerable to the President, for the purpose of investigating the now-famous Roswell UFO crash of 1947. This panel would be codenamed “Majestic-12″, or as it is often abbreviated, “MJ-12.” The men who comprised the panel are as follows:

None of the members of MJ-12 were elected officials, but all held high positions in their respective areas of employ. Five of the men on the list were leading scientists in the fields of research and development, aviation and astronomy.

Rear Admiral Hillenkoetter served in an extensive military intelligence career that had been intertwined with UFO-related phenomena for several years; not only was he listed as a member of Majestic-12, but upon his retirement from the U.S.

Navy in June of 1957, he served on the board of governors for the National Investigations Committee on Aerial Phenomena (NICAP), which was widely considered to be the most important civilian UFO research organization in the United States at the time.

Dr. Vannevar Bush was another heavy-hitter on the MJ-12 roster. He was a world-renowned engineer and inventor, the Vice President of MIT, and the founder of Raytheon.

Bush is perhaps best known for his work during his tenure as head of the Office of Scientific Research and Development (OSRD), in which he was directly involved in the development of well over a hundred different technological systems relevant to military applications including radar, the proximity fuse, and the atomic bomb.

Bush is also credited with conceiving the memex, a hypothetical information storage and retrieval system that is widely viewed as a conceptual precursor to the World Wide Web.

Wilbert Smith, a prominent radio engineer and member of the Canadian intelligence community in the 1950s, asserted in a top secret memo to the Canadian Department of Transport that Dr. Vannevar Bush was in charge of a small group of UFO researchers who had ties to the United States government.

This controversial memo, along with several other loosely connected documents, have made Dr. Bush’s alleged connection to the affairs of MJ-12 a hotly debated topic over the years.

Not too long after their emergence, the MJ-12 documents became the subject of intense scrutiny from skeptical researchers. One strike against the validity of the documents was the assertion that the typewriter used to type the 1947 Truman Executive Order was a Smith-Corona model that had not even been manufactured until 16 years later.

Truman’s signature was also reported to have been photocopied from a separate, unrelated letter from President Truman to Dr. Bush in October of 1947. Other small details were magnified, and the media largely dismissed the documents as fraudulent. The result was that by the mid-1990s, the majority of the UFO community had written off the whole MJ-12 affair as a hoax.

Proponents of the MJ-12 theory have claimed that an extensive disinformation campaign was launched in order to produce enough “red herrings” to convince the public that the story was false, when in actuality the opposite was true.

One researcher in particular, Stanton T. Friedman, spent more than a decade meticulously sifting through documents in 15 different archival libraries in order to “debunk the debunkers.”

Friedman was a nuclear physicist by trade, and widely regarded as a credible research source for the affairs surrounding the Majestic 12 conspiracy. He carefully compiled detailed dossiers on each member of MJ-12, and ultimately arrived at some very suggestive conclusions regarding their alleged involvement in the project. Below are some examples of his findings:

* On July 16, 1947, General Nathan Twining was scheduled to fly to Seattle in order to review and inspect the new Boeing-manufactured B-50 bomber, but on July 7th (one day before the first press release regarding the Roswell crash), Twining cancelled his Seattle flight and headed instead to New Mexico for a “routine inspection.” This sudden change and apparent urgency doesn’t seem to fit the bill for a “routine” activity.

* It is well-documented that President Truman met with Senator Dennis Chavez of New Mexico on July 9th, 1947 (one day after the Roswell press release), although the reason for the meeting was never disclosed.

* Dr. Donald Menzel had gained a public reputation as a highly distinguished astronomer and UFO skeptic, but what was not publicly known was the fact that he was a cryptographer and linguist who consulted with the NSA and DIA for over three decades. Menzel also held a top secret “ULTRA” security clearance, which doubtless gave him access to highly sensitive information.

On several different occasions, Menzel would publicly debunk the existence of UFOs, but his technical explanations for dismissing certain UFO cases were scientifically unsound, a fact that belies his extensive technological expertise. This fact alone suggests the possibility of a secret disinformation agenda.

Stanton Friedman’s highly detailed work on the members of MJ-12 offers dozens of points that suggest a cover-up regarding the existence and activity of this secretive group. The use of deliberate disinformation to obscure a top secret government project is nothing new; it is well-documented that this same strategy was used during the development of the Manhattan Project.

One telltale sign that there may be more underneath the surface of the MJ-12 conspiracy was an incident in the 1950s in which the Canadian Embassy in Washington had inquired of the U.S. government regarding certain UFO incidents, but was rebuffed and told that the information surrounding UFO phenomena was protected by a security classification higher than that of W88 thermonuclear warheads.

It is also interesting to note that the “bogus” MJ-12 documents emerged in 1984, only two years after the last member of the original MJ-12 roster had died.

It appears as if the UFO community is collectively uncertain about what to make of the Majestic 12 conspiracy. Stanton Friedman’s diligent work offers a compelling case for the pursuit of more answers regarding the conspiracy, but at this time an extensive investigation appears unlikely.

As to the validity of the documents that began to circulate in 1984, many have contended that the best way to keep a secret is to hide it in plain sight by intentionally discrediting it. As interest in the topic of UFOs continues to grow worldwide, it would be interesting to see if any more disclosures surface in the coming years.