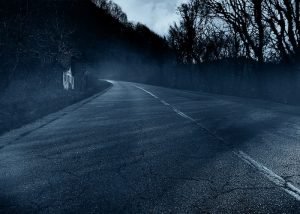 Almost everyone has a scary story to tell. For truck drivers, many of those stories come from their time spent on the road. From haunted truck stops to creepy highways, there are a lot of places that might make even the most seasoned truck drivers jumpy.

The story that you will read below was told on Reddit by a trucker who, after the experience, seriously thought about leaving his job.

“I have no idea where exactly to start this story but I have to tell someone. This happened 5 days ago, last Friday. I have told no one. Not my girlfriend, family, friends, coworkers, boss, anyone.

“So I haul feed for farmers in central Illinois. I’ve been doing this job for about 3 months and I have had no issues until Friday. I like to get my day started early so I usually wake up around 230 and I’m in the truck and off to get my first load by 3AM. I’m usually unloading my first load around 530-6 am which currently due to winter is still pitch black outside.

“I’ll be honest, I’m not usually one to be freaked out easily but certain secluded farms do kinda freak me out a little so I’ll usually just do what I need to do outside the truck as quickly as I can and spend my time waiting to finish unloading sitting in the truck.

“Some farms are fine, not too far off of main roads and or pretty well lit but there are a couple farms that are in pretty heavily wooded areas, one of which only has two shitty lights that don’t help much and currently one of the lights is out needing repairs. These hog farms aren’t always the most maintained if you want to call it that, there will be piles of pig corpses in dumpsters just lying in plain view.

“Anyway, I recognized the farm I was going to as soon as I saw my delivery ticket and knew I would be on the dark side of the farm so I wasn’t looking forward to it but I just did my usual routine, got loaded and hooked my phone up to my headset and began listening to YouTube as I drove along.

“Once I started getting close to the farm I did what I always do, I take my headset off and hang it up and start double checking my paperwork as I slowly meander down the rock road over to the dirt road I’ll turn onto that will lead me to the farm. I’ll usually drop it down to 6th gear and let it roll slowly since the road is usually pretty shitty.

“So anyway, I’m glancing up at the road and back down to my delivery ticket when I notice a horrible smell. Now farms usually smell pretty bad so I didn’t think a whole lot of it at the time but I definitely remember this smell was different.

“It didn’t smell like animal shit, it smelled putrid like something rotten. Now that I look back, the only other time I remember smelling something even close to that bad was when my family came back from vacation and our freezer had stopped working and as soon as my mom opened it this horrible foul smell flooded the house. It wasn’t the same smell but it’s the closest comparison I can make.

“I crack my window every morning because the heat in the truck can get pretty stuffy, so after this nasty smell fills the cab I put down the paperwork and start cranking up my drivers side window and as I’m doing that I notice a person, a woman, standing maybe fifty or so feet in front of me, not in the road just off to the left standing in the field.

“Now she completely caught me off guard so I panic and my heart starts racing and I slam on the breaks and kill the truck since I didn’t hit the clutch. I kinda start to laugh at myself a bit for freaking out so bad and I start rolling down the window to ask if this woman is okay and see if she needs anything. As I’m doing this she’s just standing there, almost like she’s confused.

“Now that I’m focusing on her I start to notice a few very unsettling things about this woman. For one, she’s completely nude at night in the middle of winter. It gets down to below freezing during the night so walking around like this is asking for hypothermia, frostbite, perhaps even death. The second thing I notice is she’s got what looks like blood all over her, but it’s most heavily on her arms all the way up to her elbows and it’s all over her mouth and neck.

“At this point I’m getting scared again and my left hand reaches to find the key to start the truck. I then yell out the window “Are you alright?” Or something like that to which she responds by getting down on all fours in this weird ass up head down kind of position and she runs toward me like this for ten or fifteen feet maybe.

“I start the truck and get it in gear and start slowly taking off kind of towards her since that’s all I can do to get away, as I’m doing this my window is still wide open and I can hear her making some kind of noises, it wasn’t speaking they didn’t sound like words it was kind of just screaming and grunting.

“I start flying through the gears as fast as I can and after maybe 5 seconds I hit sixth gear and she has run by this point right up to the ditch but not in it and she stops and doesn’t cross the ditch, I continue to hit gears and get away as quick as I can, my heart racing the whole time. As I’m leaving I can’t see her anymore once she gets out of the lights from my truck because it’s pitch black everywhere, I’m in the middle of the country and there are no lights.

“Part of me is trying to rationalize what just happened and thinking maybe she was a victim of something and that I should go back but she was acting completely deranged and convinced myself not to go back immediately.

“So at this point I was actually very close to the farm, so close I passed the driveway as I was running away from this woman. So I follow the road and turn back onto the highway, and basically do really big laps around the farm I’m supposed to deliver to for about 45 minutes until it’s bright outside and I can comfortably see easily.

“I then head to the farm, this time looking out for the woman or any signs of her but there is nothing. I stopped right where the interaction had occurred and walked out to where she was but there was no sign of anyone or anything being there.

“The first thing I noticed was there was no stench anymore. As I looked around I expected to see some blood at least but no. I then start walking back to the truck and notice that I left footprints the whole time I walked through the field. I turn around and double check the ground again but there is nothing, no footprints or anything.

“Now I’m a bigger guy but not huge, 6’5” and 230 lbs so maybe she was significantly lighter and that accounts for the missing prints but to me she didn’t look that thin, I think she should have left footprints. Anyway, I look around all over where I saw her move and she was gone without a trace. I go to the farm and deliver feed without a hitch, I continue my day as normal and head home.

“I don’t know what I should have done. I don’t know what I saw. Part of me thinks I left a victim behind when I could have helped, part of me wonders if it was some kind of hallucination or something but I’m young, 24, no health problems and I don’t drink, smoke, or take any substances or pills or medicine or anything that would have caused this.

“Only thing I do have is a history of having frequent sleep paralysis but that’s it, and I was absolutely not sleeping. I don’t know what I saw or what it was but I abruptly quit my job after this and am now looking for something else. Only thing I can say for sure is I never want to run nights again.”