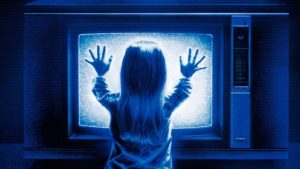 In 1982, the movie “Poltergeist” written by Steven Spielberg and co-produced by Spielberg and Tobe Hooper, opened in theaters captivating audiences all over the world.

The tag line “They’re Here,” uttered by the angelic Carole Anne (Heather O’Rourke) became a popular catchphrase in American culture. After watching only a few minutes of the movie we were hooked.

The film opts to ghosts infiltrating our worldly space in the form of both lost and hostile spirits that haunt an American family. The popular movie spawned two sequels in its wake.

But the film is also thought to have spawned more than sequels, many believe that a curse was born. Could this be just another Hollywood rumor that spun out of control or is there any validity in the Poltergeist curse? You decide for yourself.

Strange and sad occurrences that are attributed to the “Poltergeist curse”

During the filming of the first Poltergeist movie, actress Jobeth Williams was anxious about the ‘swimming pool scene because it involved her falling in the wet and muddy pool where electrical wires and lights were set up.

She was afraid of being electrocuted. After Spielberg got in the pool with her she did the scene, but what Jo Beth was unaware of at the time was that the bodies in the muddy pool scene were actual corpses, and not movie props. Staff bought them from a medical school who was done using them for their students. This is a true story.

Williams later gave interviews about the pool scene. Spielberg was also unaware of this, but the movie was already completed by then. So if this was done for the sole purpose of adding authenticity to the scene, this might be deemed as sacrilegious to many, and it’s quite possible that the dead were not too happy about this either?

Dunne’s estranged boyfriend John Sweenie showed up at her house and began harassing her. She went outside to talk to him. An argument ensued and Dominique was strangled outside of her house.

Packer called the police after he heard a series of screams, a couple of smacks, a thud, and then ran out the back door. He claims he saw Sweenie bending over something. It turned out to be Dominique.

When police showed up, Sweenie screamed, “I killed my girlfriend.” Dominique was not dead at that point but was unconscious. She was taken to Cedars-Sinai Hospital where she lapsed into a coma and died five days later.

She was the daughter of Dominick Dunne, novelist and Tru TV host of the show “Power, Privilege, and Justice.” Dominique was buried at Westwood Memorial Park.

Judith Barsi, another child who made a commercial with Heather O’Rourke for Rainbow Brite, was murdered, along with her mother, by her father, five months after Heather died. She was 10 years old. 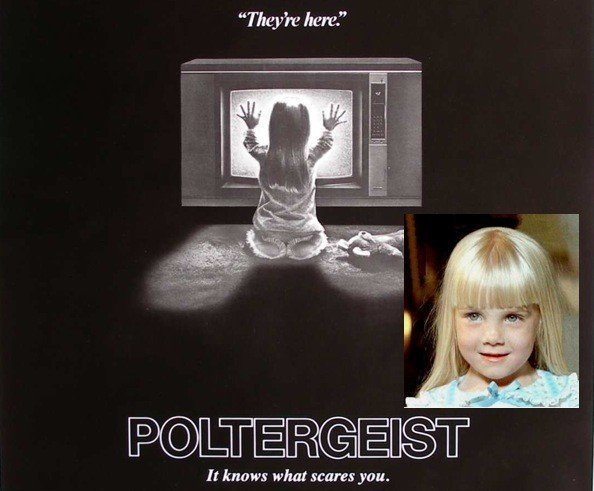 *While filming the movie Poltergeist, Joe Beth Williams experienced strange phenomenon in her own home. She claims that each day after filming, she returned home and the pictures on her walls were askew.

She would straighten them, only to return the following day, after filming, to find them hanging haphazardly again and again.

During a scene when Robbie Freeling (Oliver Robbins) was being attacked by the toy clown, the prop malfunctioned, actually choking the boy. Spielberg heard Oliver saying “I can’t breath,” and noticed the boy was turning blue.

He ran to the aid of Robbins before the unthinkable could happen. Accident or something more ominous?

James Khan claims that while working on the novelization for the movie, a freakish storm buffeted his building. Thunder and lightning shook the building so hard that when a bolt of lightning struck the building, it shook it so violently that the cover of his air conditioner blew off, thus striking him in the back while he was busy typing.

The house used in the first Poltergeist movie, in Simi Valley, California, was later damaged by the Northridge earthquake of 1994.

Poltergeist II: The Other Side

While filming on the set of Poltergeist II, a feeling of unease was shared by many of the cast and crew. Actor Will Sampson, a Creek Indian and a real Shaman, actually performed an exorcism on the set, to rid it of negative spirits. 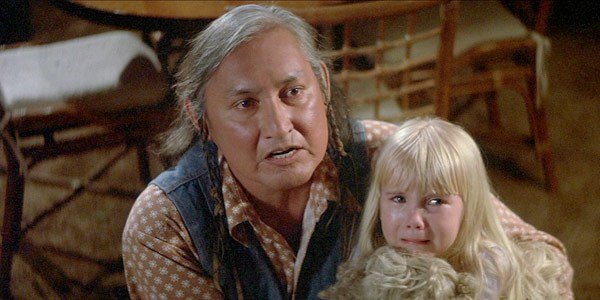 A year after the movie was released, on June 3, 1987, Will died of complications from a heart-lung transplant.

In an interview, Craig T. Nelson later said, “I am convinced that the presence of Will Sampson on this film saved us from tragedy. Sampson not only plays a shaman, he is himself a shaman, and I believe that it cost him dearly in terms of his own personal health to see us safely through.”

Another story surfaced during filming, that real corpses used rather than film props. The corpses were used in the scene under the house in Queste Verde, in the cave.

A couple of months after filming was completed for POLTERGEIST II, on September 24, 1985, actor Julian Beck, who played the diabolical Reverend Henry Kane, died after a battle with stomach cancer.

While shooting photos for Poltergeist III, one photo taken of Zelda Rubinstein had an anomalous bright light obstructing her face. Rubinstein claims the photo was taken at the moment of her mother’s death, and attributed the light to a spiritual connection with her mother.

During a scene in Poltergeist III, a fire destroyed a parking garage movie set while filming the scene, injuring most of the crew but one.

While on break from filming the movie POLTERGEIST III, Heather O’Rourke, who played Carol Anne Freeling in all three movies, died from septic shock, from an intestinal blockage that burst. Her condition had been misdiagnosed for two years before it turned deadly. The movie resumed filming, with a stand-in to play O’Rourke’s part.

Note: While Heather was on the operating table, her mother, Kathy O’Rourke saw the ghostly image of her child but didn’t realize it at the time. Heather looked so real standing in front of her. While Kathy sat in the waiting room, Heather walked up to her mother in her nightgown.

Her mother asked her what she was doing there in her nightgown. Heather answered, “I’m not coming back.” Kathy asked her again what she meant, Heather repeated herself and disappeared. Kathy found out soon after her encounter, that her daughter had just passed away on the operating table. This is a true story.

Heather O’Rourke was buried in Westwood Memorial Park, very close to where her co-star Dominique Dunne was buried.

So was there a curse that followed after the filming of Poltergeist I, II, and III? Is it possible that the disrespectful act of using real corpses in the filming of both Poltergeist I and II set off a chain of unfortunate events that spiraled out of control?

Or could it be that the dark spiritual nature of the movie itself opened a doorway, inviting in a host of ghosts, and real phenomenon to take place? Or is this all just very sad coincidences?

Perhaps no one will ever be able to prove or disprove that there was a curse. And perhaps this shall remain quite simply, just another Hollywood mystery.