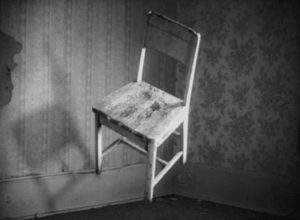 The Adam Livingston farm in Middleway became a place of both fear and curiosity in 1797, when people came to see the “Livingston Wizard” perform its strange magic.

Dishes fell out of cabinets and broke on the floor, fires and lanterns went out with no one near them, things flew about the house by their own power, money vanished, livestock disappeared and died and strange screams and bells were heard around the farm.

One afternoon. Livingston saw a man stopped in the road with a wagon. The teamster demanded that Livingston remove the rope that was stretched across the roadway.

When he said there was no rope, the driver angrily slashed at it with his knife…. but the blade passed through nothing. Another wagon came along at the same time and this driver also saw the rope but he couldn’t cut it either. Finally, Livingston convinced them to move on.

A short time later, the strange events took another turn. Day and night, the family heard the sound of cutting shears in the house, snipping constantly with an irritating metallic sound. Items around the house began to be mysteriously cut apart… clothing, blankets, saddles, shoes, boots, anything that could be cut was scissored into odd spiral shapes.

Another visitor, a tailor from Middleway, planned to expose the stories as a fraud. He walked to the house, carrying a suit that was wrapped in a paper bundle under his arm. He heard the sound of the shears, but saw nothing. When he unwrapped the untouched paper, he found that the suit inside had been sliced into pieces.

What started these strange events in the house? It is believed that they were tied to a stormy night in 1794 when a stranger appeared at the door of the Livingston house and asked for shelter.

The family took him in and fed him but in the middle of the night, Adam Livingston hears strange wheezing and gasping sounds. The stranger was coughing violently, and was barely able to speak, but he did manage to ask his host to summon a priest… the man realized that he was dying.

Livingston, being a devout Lutheran, knew of no priest in the area and besides, he had always sworn that no Catholic priest would ever set foot on his property! In the night, the stranger died and the next morning, some neighbors helped Livingston to bury the man in a corner of his property. A small cross was erected at the grave.

The bizarre phenomena began just hours after the burial and would continue for years.

The story of the haunting gained fame in the area and the ghost became known as “The Livingston Wizard”. The family was plagued by the events for years and Livingston implored his minister to conduct an exorcism on the property.

The Lutheran pastor failed, as did an Episcopalian minister and three Methodists. One night, Livingston dreamed of a man whom a voice said could help him. He was a Catholic priest named Father Dennis Cahill. Some friends in Shepherdstown helped to track the man down and he came to the Livingston farm.

Father Cahill blessed the house with holy water and as he turned to leave, a satchel of money that had been missing for over a year suddenly appeared and fell onto the doorstep. It all appeared to be over at last…. but it wasn’t. The manifestations soon began again.

By this time, the story had spread as far as Baltimore and the Catholic diocese there sent Father Dmitri Gallitzin to investigate. After living with the Livingston’s for three months, he recommended an exorcism. Father Cahill returned to the house and the two priests, and the entire family, prayed for the spirit to leave the house. The horror was finally over.

Livingston was so grateful that he converted to Catholicism and in 1802, deeded 40 acres of his estate to the church. In 1978, a religious retreat called Priest Field Pastoral Center was built on the land.

But have the strange events of the past really ended? Some say they have not… A priest who was leading a tour group of the retreat had his metal-rimmed glasses snipped in two by an unseen force and tourists who have visited the site have reported camera straps, purses, clothing, and other items have been mysteriously cut to pieces.