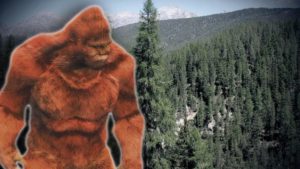 This is the second reported Bigfoot sighting in Alberta, Canada in 2020, and there have been at least a dozen of them in the past few years.

Four such cameras were deployed in the area to track the movement of wild wolverines. The biologist who worked on this project did not expect to see a huge Bigfoot here.

In size, this creature is about 3 meters high and more than a meter wide. It moves slowly behind the tree, as if shifting from foot to foot.

There is an assumption that the Bigfoot was here in ambush, since earlier the same camera filmed two deer in the same place, which quickly ran away.

The authorities admitted that the surveillance camera really caught something or someone, but for the moment there was no explanation from them.