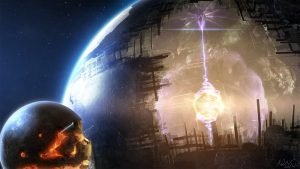 There are several ways to measure the progress of human civilization. The rise of population, the rise and fall of empires, our technological ability to reach the stars.

But one simple way to measure it is to count the amount of energy people consume at any given time. As humanity has spread and developed, our ability to use energy has become one of the most useful skills.

Assuming that civilizations on other planets may have similar skills, the energy consumption of one species or another is a good proxy for its technological prowess. It is this idea that underlies the Kardashev scale.

This idea was popularized by Carl Sagan, who suggested using a continuous scale of measurements rather than just three types.

So what type of civilization do we belong to? Although people consume a huge amount of energy, it turned out that we are not even the first type.

On average, about 1016 watts of solar energy enters the Earth, and humanity currently uses about 1013 watts. On the Sagan Sliding Scale, this means we are currently at 0.73.

Not bad for a bunch of evolved primates, but it raises an interesting question. Can we even achieve the first type? After all, we can’t capture all the sunlight that hits Earth and still have a habitable planet.

This issue is explored in an article recently published in arXiv. The paper considers three main sources of energy: fossil fuels, nuclear energy and renewable sources, and calculates their potential growth over time.

On the one hand, it would seem that achieving the first type is quite simple. Make energy production your top priority, and you will get there in the end. But each type of energy source has its limitations.

In the extreme, burning every ounce of fossil fuel could cause climate change to the point where we would all be caught in what is known as the Great Filter. You cannot become a civilization of the first type if you are already extinct.

So the team is taking a more nuanced approach, analyzing the physical limitations of each type of energy source and weighing them against the need to limit climate change and pollution, as mandated by the United Nations Framework Convention on Climate Change and the International Energy Agency.

They found that even with realistic limits, humanity could reach Type I levels. The downside is that we won’t reach that level until at least 2371.

It’s not necessarily bad. The Kardashev scale is a very dumb tool for measuring the scale of human technology.

While advanced civilizations require significant amounts of energy, we have seen how advances in low-power computing and efficiency gains allow us to reduce or even out energy consumption while continuing to advance technologically.

Although this study shows how we can become a type one civilization, it is possible that we will become truly advanced when we realize that we do not need it.

Can Sensitivity To Paranormal Events Be Transferred Through DNA?