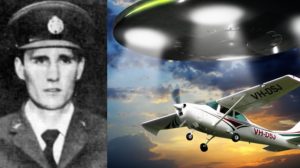 UFO sightings, alien abductions, and extraterrestrial communications have always been explained away without a second thought by the skeptics; never so much as to satisfy the believers, but explained none the less.

The case of Frederick Valentich however stands out. Not only does it appear that he and his plane were abducted mid-flight by a gigantic craft, but the entire incident was recorded by air traffic control following similar sightings as far away as New Zealand. Welcome to Cape Otway…

Australia in general has always been a hotspot for unexplained lights in the sky, UFOs, and even abductions, but no region so much so as the Southern tip. Cape Otway is the Southern most point in Australia, roughly 200 miles from the coast of Tasmania.

For centuries locals have been reporting the UFO occurrences that we’re all very familiar with; lights in the sky, etc. On the 21st October 1978 all of that changed. A young pilot named Frederick Valentich flying his Cessna 182L light aircraft over the Bass Strait vanished without a trace.

To be absolutely clear; air traffic radar did not record him descending, flying erratically, or even changing course; he and his craft simply vanished. What’s more so is that he was in communication with Melbourne Air Traffic Control at the moment he vanished. These are his final words.

Despite the fact that the second craft was not appearing on radar, the assumption at this time was that the other aircraft was intentionally harassing Valentich, but Melbourne Air Traffic Control had no reason to believe it was of any sort paranormal. The second craft was gone from sight for roughly 10 minutes, and then Melbourne Air Traffic Control received this final message:

Valentich: Ah… Melbourne that strange aircraft is hovering on top of me again… (two seconds open microphone)… it is hovering and it’s not an aircraft…

Those were the last words Frederick Valentich would ever say. In mid sentence he and his plane vanished completely, but not before Air Traffic Control recorded seventeen seconds of a metallic scraping sound. 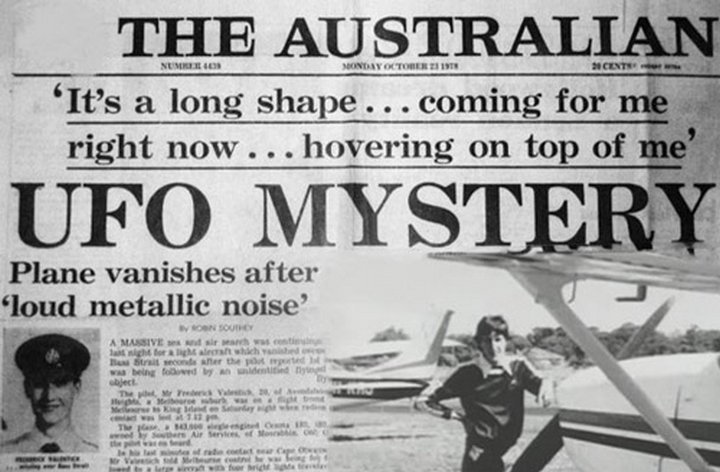 The wreckage of his plain was never found, nor was any wreckage from the second craft (the original assumption was that the two had collided). There was also no trace of aviation fuel in the water or on the land where the disappearance occurred, furthermore; Valentich’s plane was equipped with an emergency radio beacon that never activated.

The Australian Department of Transport’s investigation formally concluded with the statement that the events leading up to and the disappearance of Valentich’s plane could not be satisfactorily determined.

The investigation focused heavily on the seventeen seconds of “metallic scraping sounds”. These sounds were analyzed by the Australian Department of Transport, researchers Paul Norman and John W. Auchett, the Royal Melbourne Institute of Technology (RMIT), and by Dr. Richard F. Haines in the United States, a former researcher with NASA-Ames and the Associate Professor of Psychology at San Jose State University.

These were the top minds in their fields and they all had the same conclusion; “We have no idea”.

Despite the news of the disappearance not being released until hours later numerous reports of a UFO were flooding phone lines at everywhere from fire departments to police stations, each of them describing the same craft. It was described as a large, very shiny, metallic craft with four very bright lights on its bottom side. It was rounded, but very long.

Since that October 34 years ago Cape Otway has become a hot spot of for UFO sightings, including many people describing the same craft as was reported on the day that Valentich vanished.

Of course the large increase in reports is easily explained by the story becoming something of an urban myth, and I agree, but what is less explainable are the simultaneous reports from miles apart reporting that same craft as was described in 1978.

More so, there have been a handful of pilots that while flying in above the Bass Strait as Valentich did have spotted the same craft, and changed course. Those pilots are on record as completely refusing to fly that airspace again.

As so many of these articles end, what the craft above the Bass Straight, hunting Cape Otway is we may never know, but one can be fairly certain that whatever it is, its still there.