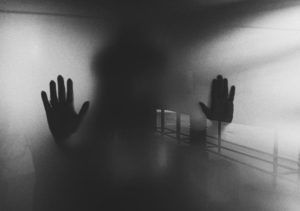 This story is true. My name is Kaitlyn, I’m 19 and live in Tullahoma, Tennessee. The first story I will tell you is that of my father’s.

My mother, father, and I had just moved into a two story house with my 33 year old sister, Tami, her two children and her husband Terry. During this period of time we weren’t aware of the history behind the house. We lived upstairs and Tami and her family lived downstairs. One night around 12:00am my father was on the computer playing a game while my mother was in bed and I was in my room listening to music and reading.

I heard my father call my name and I tiredly and reluctantly climbed out of bed and walked into the living room seeing my father frozen in fear. I rushed to his side and asked him what was wrong. He hesitated then explained that he had hear tapping on the window and had opened the blinds to find two red eyes looking at him he immediately freaked out. (By the way, my father doesn’t believe in ghosts) Now I have always had an interest in the paranormal but I decided to think rationally and told him it was probably just a cat or a tree or something.

Then I remembered that we were upstairs and there was no window ledge nor trees by that window. I was completely baffled. See I have never lived in a haunted house before so I’m not used to this. So my father and I just brushed it off and went on with out lives.

My sister Tami is a very rational person and doesn’t believe in ghosts either, as is my brother. Yet, this experience changed their minds. Everyone had gone to bed. At 5:30am I woke up with a jolt and had an instinct feeling that I always get when something isn’t right. I went into my parents room and they were both sitting up in bed. I asked them when they got up and they both woke up the same time as me with a jolt. Well we all had a feeling to go downstairs. See first right when you get to the bottom of the stairs you come to the joined dining room and kitchen. From the dining room there is a doorway that leads to the office.

Well the light was on our side, there are two doors in there, one leading into the hallway on the other side of the house. Well I turned on the light to see my sister and brother standing at the other door and gasped. The whole room was destroyed. The desk was tipped over the computer smashed the cabinet face down on the floor and papers everywhere. My sister and brother stood their wide eyed looking at us and they knew we couldn’t have done this.

I asked them what time they woke up and they said the same time as us. Strangely we didn’t hear anything. When you walk through the house you can here your footsteps because the house is elevated because of floods. Also, my sister and brother-in-law’s (Terry) room is right next to the office so they should have heard something. Though they woke up with a jolt and didn’t hear a thing. My nieces were still asleep. We never had an explanation for what happened that night and it wasn’t mentioned for the rest of the time we were there.

This is my last story. This story was my experiences. It has a few but they are mostly too short to put into separate paragraphs. My father and I were in our living room when I heard a music box. My father turned around and looked at me and I shrugged and gave him a confused look. then we both looked at the closet. The jingle was “It’s a Small World After All” and I remembered I had a little trinket that played that song, but I haven’t wound it up for years. I went to the closet and opened the door (which is right next to my dad) to see the trinket spinning and playing the song. I didn’t think much of it until I realized that the trinket doesn’t spin. I got really freaked out and took it out of the closet and put it in the garage.

There was no use in that because the next day it was back in the closet and no one had moved it from the garage. Here’s another one. Every night I would wake up to see the dark silhouette of a man hovering over me. The first night I screamed after 3 nights of this all I had to do was say “please go away” and he would vanish. I finally figured out that there were 2 spirits in the house. I got a background check on it and put it together.

The man had died of cancer in the upstairs of the house which is the only place he is present. The man had earlier claimed the house after the divorce of his wife. His wife loved the house dearly and refused to give it up. One night she had come to visit to fight about the house. They were fighting in what is now my sisters office. She got extremely violent, being unhealthy and the age she was she had a heart attack and passed away. The woman was a sinful woman that was determined to torment anyone who came to be in that house.

While the man who was upstairs tried his best to protect it. In the middle of the night I would hear dishes crashing and rush downstairs to find nothing. Faucets would turn on full blast. The office was torn apart 3 more times. Finally the thing that drove my parents and I out of the house. One evening I became very ill out of no where with a high fever and nausea. In the middle of the night I went downstairs to get a glass of water and saw and apparition that still sends chills down my spine at the though of it.

It was a dark shadow with eyes that were bright as burning embers. I tried to ignore it and fixed myself a glass of water and headed back up the stairs.

As I got to the 9th or 10th step I heard running footsteps and felt two cold hands grab my shoulders and yank me backwards causing me to loose my balance and I came crashing backwards down the stairs. I broke my arm and sprained my ankle on the way down and let out a blood curling scream as this shadow grabbed my broken arm and with inhuman strength threw me onto the dinning room table and vanished.

I lay there yelling out in pain because as hard as I hit the table I knocked my shoulder out the socket. Now I have heard of spirits causing physical harm. Well my sister and brother and my mom and dad and one of my nieces came running in to find me sprawled out on the table unable to move because of the pain. I was rushed to the hospital and we all stayed there overnight. Needless to say the next day we were out of there. We left our belongings until we were able to come retrieve them all.

We stayed with a friend of ours. This is my true ghost story. And as my sister and brother and father all learned, things are not what they always seem to be.