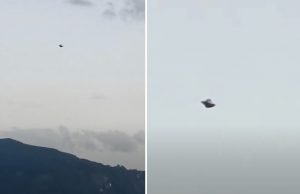 A Colombian eyewitness captured unusual footage of a flying saucer-shaped UFO that appeared to have landed in the distance.

Photographer John Vargas reportedly captured the curious scene last Saturday in the city of Medellin. In the video, the mysterious object appears at first to be just a dark blob floating in a cloudy sky.

However, the object is seen to have the legendary flying saucer shape so often associated with the UFO phenomenon.

As Vargas and his companions watch the strange sight, they argue over what it is they see. His friends claim it could be some kind of drone, but the photographer insists it isn’t.

Then the observation takes an unexpected turn: the “flying saucer” begins to slowly descend from the sky and eventually lands somewhere in the city. Unfortunately, Vargas’ footage ends without any indication of where the UFO may have ended up landing.

As for what the UFO could have been other than some kind of alien craft, one cannot discount the possibility that it was just a drone, despite Vargas dismissing the idea.

Otherwise, another explanation is that the strange object could just be a balloon.