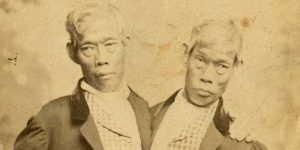 Chang and Eng Bunker were Thai-American conjoined twin brothers whose condition and birthplace became the basis for the term “Siamese twins”. The Bunker brothers were born on May 11, 1811, in Siam (now Thailand), in the province of Samutsongkram, to a fisherman and his wife.

Because of their Chinese heritage (as they were born from a Thai Chinese father and a Chinese-Malay mother), they were known as the “Chinese Twins” in Siam. They were joined at the sternum by a small piece of cartilage. Their livers were fused but independently complete.

In 1829, British merchant Robert Hunter “discovered” them and paid their family to let them be exhibited as a curiosity during a world tour. Upon termination of their contract with Hunter, the brothers successfully went into business for themselves. In 1839, while visiting Wilkesboro, North Carolina, the twins were attracted to the area and settled on a 110-acre (0.45 km2) farm in nearby Traphill.

Determined to start living a normal life as much as possible, the brothers settled on a plantation, bought slaves, and adopted the name “Bunker”. On April 13, 1843, they married two sisters: Chang to Adelaide Yates and Eng to Sarah Anne Yates. Upon their marriage, the brothers became naturalized American citizens. 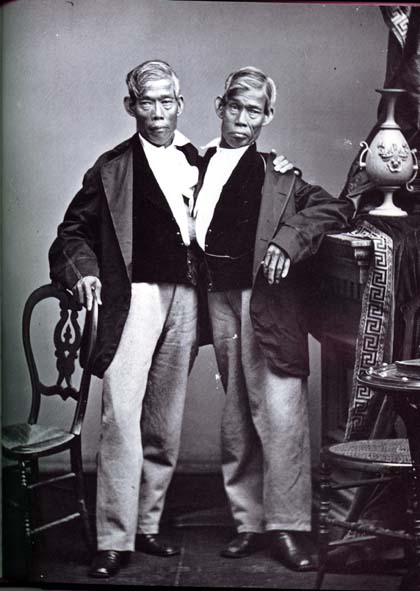 Their Traphill home is where they shared a bed built for four. Chang and his wife had eleven children; Eng and his wife had ten. In time, the wives began to squabble and eventually two separate households were set up just west of Mount Airy, North Carolina in the community of White Plains – the twins would alternate spending three days at each home.

During the American Civil War, Chang’s son Christopher and Eng’s son Stephen both fought for the Confederacy. Chang and Eng lost part of their property as a result of the war, and were very bitter in their denunciation of the government in consequence.

After the war, they again resorted to public exhibitions, but were not very successful. They always maintained a high character for integrity and fair dealing, and were much esteemed by their neighbors.

In 1870, Chang suffered a stroke and his health declined over the next four years. He also began drinking heavily (Chang’s drinking did not affect Eng as they did not share a urinary system). Despite his brother’s ailing condition, Eng remained in good health. Shortly before his death, Chang was injured after falling from a carriage.

He then developed a severe case of bronchitis. On January 17, 1874, Chang died while the brothers were asleep. Eng awoke to find his brother dead and cried, “Then I am going”. A doctor was summoned to perform an emergency separation, but he was too late.

Eng died approximately three hours later. An autopsy revealed that Chang had died of a cerebral blood clot but Eng’s cause of death remains uncertain. Doctors of the time theorized that Eng died of shock due to fear of his impending death. They based that theory on the fact that Eng’s bladder had distended with urine and his right testicle had retracted.

They also dismissed the claim that Eng died of shock and attributed the muscle cramping that caused his testicle to retract was caused by “acrocyanosis from induced vasospasm and microthrombi due to disseminated intravascular coagulation, the tissue factor released from necrotic tissue and the endotoxin from sepsis activating coagulation cascade.”

Don Decker – The Man Who Made It Rain