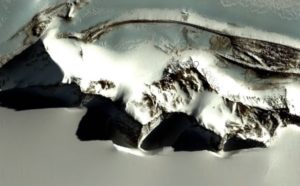 While viewing the surface of Antarctica on Google Earth, a Youtube user with the nickname MrMBB333 saw something strange.

He posted the video (see below) showing his find on the Internet and it immediately attracted the attention of a huge number of people.

The author of this discovery is confident that he was able to find a very ancient wall, the length of which reaches several miles. Also on the map there are two huge buildings that are somewhat reminiscent of ziggurats – places of worship that were once popular in Babylon.

A ziggurat is a type of massive structure built in ancient Mesopotamia. It has the form of a terraced compound of successively receding stories or levels.

In the video provided by MrMBB333, you can see the curved fortress wall and two buildings resembling pyramids.

They are partially hidden by a thick layer of snow and ice. The man believes that this is only a small part of the huge structure that can be located under the ice of Antarctica.

This find once again proves that once upon a time there was an ancient civilization in Antarctica, the mention of which, unfortunately, has not been preserved in history.