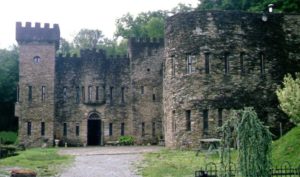 Just outside of Cincinnati, the suburb of Loveland has nicknamed itself the “Sweetheart of Ohio.” Because of this you may expect to see a statue of Julia Roberts in the town square, a permanent tribute to ranch dressing or maybe traffic lights that illuminate in pastels and look like valentine’s day candies.

The last thing you would probably expect to find is a life size reproduction of a Norman castle that was built by an eccentric genius as a means to save humanity from civilization’s inevitable decline. But, Lo! That is exactly what sits on the bank of the Little Miami River in this affluent suburb.

No story of Chateau LaRoche (aka Loveland Castle) would be complete without first mentioning the fascinating life of it’s builder, Sir Harry Andrews.

Born in 1890, Andrews graduated from Colgate College and used his 189 point I.Q. to learn 7 languages before being sent to Fort Dix, New Jersey to train for engagement in the upcoming first World War. Unfortunately, meningitis swept through the camp, killing 7000 of the soldiers, including Andrews.

End of story? Far from it.

Andrews body lay on a slab in the morgue for two days before they got around to an autopsy. After noticing that he bled when they were trying to collect bacterial samples from the roof of his mouth, doctors decided to try injecting Andrews heart with adrenaline.

He was blind and paralyzed and given only given two days to live, but Harry Andrews had returned from death!

Before long he defied the laws of medicine further and made a full recovery. Through transfusions of his antibody-rich blood, Andrews helped others survive meningitis before joining the war effort as a medic at Château LaRoche, France.

During his time in France, Harry was dubbed with knighthood after saving the life of an English nobelman’s son, studied architecture at Toulouse and taught American soldiers to speak the native language.

When he learned that his fiancee had married another after receiving word he had died of meningitis, heartbroken Harry disavowed himself of female companionship and dived head first into the world of medieval knight culture.

If you’ve ever attended the Ohio Renaissance Festival, then you’ve seen this sad form of resignation first hand. Sir Harry carried this obsession to a wonderful conclusion, however (as long as you over look the creepy factor of a grown man shunning women and devoting his life to young boys.)

Upon his return to the States, Sir Harry founded a boy scout troop he called “The Knights of the Golden Trail.” The young men in this troop are bound by an oath to restore nobility and civility to modern society just as the knights of old did for Medieval Europe. Their only governing rules are the ten commandments.

If you visit Loveland Castle you will meet one of these knights as the building is now in their care. During our visit we noticed that friendliness was NOT included in the ten commandments, but I get it. Those folks have to be sick of the same questions day in and day out. 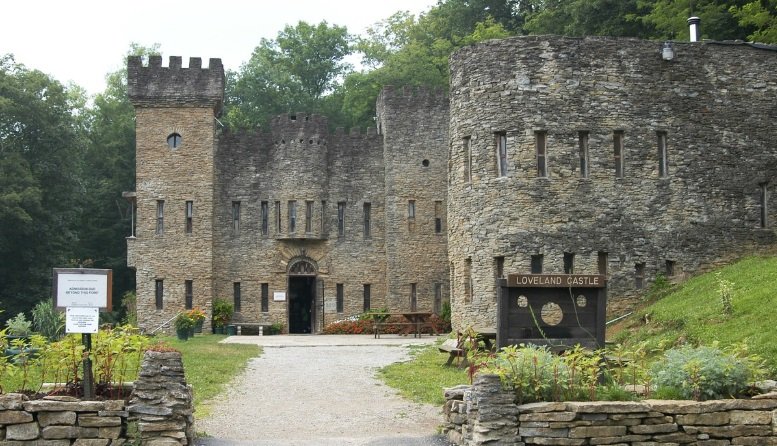 Around 1927, Sir Harry decided that his troop of knights deserved a proper castle and, using land donated from a newspaper subscription contest, began work on Château LaRoche.

Sir Harry started quarrying stone from the Little Miami in 1929, but construction of his castle didn’t kick into full gear until he retired in 1955. From the age of 65 to 91 Sir Harry would haul 65lbs of stone from the river each day, continually adding to his masterpiece.

Tragically, Andrews accidentally caught himself on fire while burning rubbish at the castle in 1981 and died from the injuries he sustained. This time he stayed dead. Maybe.

Before his death, Sir Harry would tell his scouts about the ghost of a Norman knight that would come to his door after dark. The knight is thought to be attached to one of the medieval artifacts that have been brought from Europe to decorate the castle and is still seen on occasion.

Another presence Harry called “Casper Poltergeist” is still around moving objects, banging on doors and even stunning people with an electric jolt sensation if offended.

Knights of the castle say that this spirit has alerted them when mischevious scouts have taken things from the castle, foiled burglary attempts and even drew attention to a septic problem by repeatedly slamming the bathroom door.

He also spoke of the ghosts of two children that died in a fire on site before he owned the property. Young folks at overnight slumber parties love to attempt communication with these spirits that one psychic pinned as a 13-year-old boy and his 7-year-old sister.

Yet another ghost attributed to the land is thought to be a woman that died in a moonshine still explosion at a cavern just down from the site. During the early construction of his castle Sir Harry heard a loud boom and ran to the still, only to find the woman crushed by a whiskey barrel.

Since then, a woman with long hair and a billowing gown has been seen walking along the river and through the castle’s garden.

Then there were Sir Harry’s tales of an egg-shaped spirit with glowing red eyes that lived in the branches of a willow tree, until the tree’s demise in the mid 1970s.

Sounds like an owl to me, but stranger things have happened here. Just scroll down to March on Booze Boos time line and read the story of the Loveland Frogmen!

Guests have reported terrifying experiences with darker energy in the dungeon, where Andrews once stored his canning and vegetables. Today it seems to house growling shadow entities that aren’t afraid to scratch a visitor from time to time.

Last, but not least, we come to the ghost of Sir Harry, himself. After his death, attendants noticed that any time they placed an object on Harry’s bed it would be found on the floor the next morning.

He has also typed messages to his knights via an old typewriter. Moving pieces on the castle’s chessboard get blamed on him as well. Just be warned that Sir Harry plays at his own pace and it may take days before you could checkmate his ghost.

In addition swinging chandeliers, darting shadows, unexplained footsteps, disembodied voices and a rocking chair that moves on it’s own are also attributed to Sir Harry and his gang of ghosts.

Thus it appears that more than Sir Harry Andrews legacy lives on among the stones and antiques at Château LaRoche.

If you would like to visit, check their website for current open hours and upcoming events: www.lovelandcastle.org