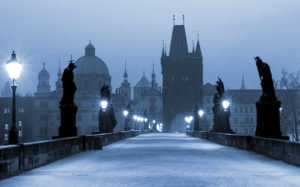 Even without visiting Prague, most people have a good idea of what to expect of the city. The capital of the Czech Republic is famed for its cheap beer and excessive nightlife, attracting stag and group holidays all year around.

Prague also has a (well-earned) reputation for being a cultural city, with a complex communist history, exquisite examples of Baroque and Gothic architecture and a wide selection of museums and galleries. But, unless you’ve visited Prague for yourself, it’s very rare to find people who know about the haunted streets, famous legends and violent stories of Prague’s past.

One of Prague’s ghosts is so famous that the city has a statue in his honour. The Iron Man statue is found in Prague’s Old Town, and is one of the only statues in the world to honour a ghost. The legend goes that the Iron Man was once a local Czech man called Jáchym Berka. Engaged to his childhood sweetheart, Jáchym Berka left the city to defend his country in the wars.

On his return Jáchym was told his betrothed had been unfaithful to him, a malicious lie that Jáchym believed to be true. Without speaking to his fiancée, Jáchym married a different girl. When his childhood sweetheart heard Jáchym had returned and married somebody else, she was so heartbroken that she drowned herself in the Vltava River.

Her father, in shame of the whole affair, killed himself by leaping out of a high tower. When Jáchym realised he had been lied to, that his fiancée hadn’t been unfaithful and that now she and her father were dead as a result of him marrying another girl, he strangled his new wife and then hung himself in a cellar on Good Friday.

His unhappy story and violent death has led many to believe that Jáchym’s soul does not rest. He is said to wander Platnéřská Street, trapped in a ghostly servitude, waiting to be released. But his freedom comes at a price.

Every 100 years, legend says that Jáchym has a chance to be freed if he has a friendly walk with a pure virgin girl for one hour. Unfortunately for Jáchym, he has yet to find a girl willing to do so. The last chance for the Iron Man to be freed was in 2009, and without finding such a lady to free him, the Iron Man continues to haunt Prague for another 100 years.

Another notorious legend of Prague is the ghost of Headless Laura that haunts the Dominican Monastery. The stories say that when she was alive, Laura was one the most beautiful and talented actresses in all of the Czech Republic.

Unfortunately for a woman so beautiful and talented, Laura was married to a man who had a mean jealous streak. Laura performed at the Nostic Theatre in Prague, and one of her regular admirers was a rich count who was madly in love with her. 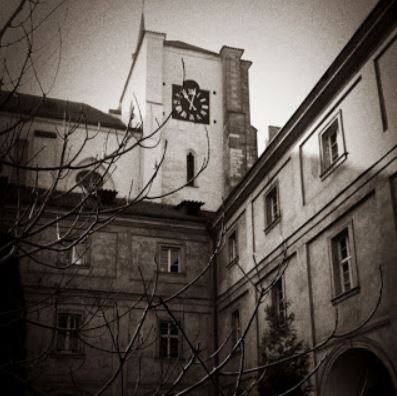 The count wished to win Laura’s heart and wooed her, and eventually Laura fell in love with the count and began an affair with him. One night, after being with the count, Laura came home to find her husband still up. He was suspicious of her, accused her of infidelity and in a jealous rage he killed her and cut off her head.

The husband’s fierce hatred of the count meant that he sent the head of his decapitated wife to the count’s house. No-one knows where the count buried Laura’s head, and now it is said that headless Laura wanders Mala Strana at witching hour unable to rest without her head.

There are so many ghost stories and legends of Prague and many have dedicated attractions to their stories. The Prague Ghost Museum is a must for ghost-lovers visiting Prague. If you’re strapped for cash though, you can print off a free street map of Prague, with a route of the famous ghost sites.

Ghost Story of The Wickerham Inn