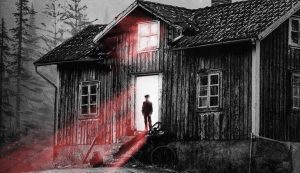 I have always been fascinated with ghost stories and I am a believer that there are spirits out there and that it takes people with a special gift (whether they know it our not) to contact them.

While my mother does not want to admit that she believes in ghosts, I can never forget the story that she told her siblings one night when I was a kid.

While I have no proof that this is true, my mother swears to the events and I must believe her because every time I hear the story each detail is always the same.

My mother grew up in a small town in Kentucky and was a part of a tight knit family. As a child she spent a lot of time in an old house owned by her aunt and uncle. This house had once been a plantation and housed slave punishment quarters in the cellar of it. When my mother was a small child playing, the shackles and chains were still in the cellar.

She often heard her cousins telling stories about strange things that happened in the house like windows and drawers being opened and closed, things being thrown around the room etc. She can remember when it was completely dark outside the children (she included) would go up to the top floor of the house and look out towards the lake.

Each time they did they saw a light that would slowly circle the outer bank of the lake. After seeing the several such strange occurrences on a regular basis, one of the family members began some research about the history of the house and found accounts which discussed how slaves there were often required to do a type of “patrol” (I am not sure of the right word) around the property and the lake was a part of that path they walked each night.

My mother also recounts not being able to sleep at night because of being kept awake by the sounds of moaning and scratching coming from the cellar below. The first real scary moment my mother had there occurred when she was eating cake batter out of a glass bowl.

The bowl kept scooting on its own across the table. Each time she would tell her cousin to turn around and watch and each time it would stop. When the cousin did not believe her, my mother began to get upset and started to cry.

When the cousin turned around to say something to her the bowl flew off the table, levitated and then crashed to the floor.

However, the most horrifying moment for my mother at this house was when she and her cousins were playing a game of hide and seek. All of the adults in the household were gathered in the kitchen and the kids went into the living room/parlor to play.

After turning off the lights and assuming their hiding positions my mother found herself sitting on the sofa with a female cousin of hers behind it. The silence of the room was suddenly broken when footsteps were heard coming up the front steps.

In the darkness she could hear the front screen door creak open and the footsteps walked across the floor and stopped in front of the sofa. All of the children there began to stare at the sofa because they could hear the breathing of a man and could smell a sudden burst of human sweat.

The couch sank in as if someone had sat down beside my mother, but no one was there. the breathing continued and slowed down and then it rose from the sofa, walked back across the room, opened the door and left.

Immediately the kids jumped up and turned on the lights only to find nothing, but a warm indention on the sofa several inches away from where my mother had been as if someone had just been sitting there.

My mother never went back there to stay the night after that.

Mysteriously the house burned down the first time her aunt (who had never left the house since they purchased it) went to visit her sister-in-law up the road to borrow some things she needed for canning. The fire was investigated, but no cause was ever found.