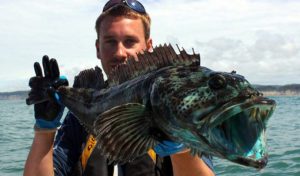 The pacific fish lingcod, or, as it may also be called, buffalo cod, has 500 needle-shaped teeth. They are so strong that they can easily cope even with crustacean shells and crush them in a matter of seconds, reports the New York Times.

The fish, as a rule, hunt from an ambush. At the same time, anyone can be in her diet, starting with squid and ending with a huge crab. For a long time, experts could not understand how lingcodes keep their teeth so sharp over the years.

The latest study, the results of which were published in Proceedings of the Royal Society B, showed that a predator replaces about 3% of its teeth every day.

This suggests that fish lose about 20 teeth every day. If the process took place at such a speed in a person, then he would completely renew the entire jaw in a month.

Emily Carr said that the study was conducted in a laboratory setting. Lingcodes were placed in different aquariums, where there was ordinary water, with red and green dyes.

Then the experts examined their jaws. Old teeth were stained red-green, and those that were completely new took on a green tint.

The scientists add that most fish have two sets of jaws. Lingcodes are no exception. The first pair of jaws is usually used to grip and grind food. The second pair helps the fish to chew and swallow.