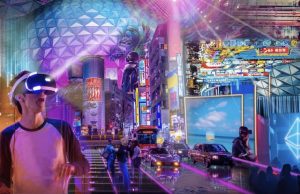 The creator of the first AR (Augmented Reality) systems made a gloomy prediction: the metaverse could change reality as we know it.

The metaverse (a portmanteau of “meta-” and “universe” or “Universe” and “Meta”) is a hypothesized iteration of the internet, supporting persistent online 3-D virtual environments through conventional personal computing, as well as virtual and augmented reality headsets.

The term “metaverse” was coined by American science fiction writer Neil Stevenson in his 1992 novel Avalanche. With this word, he described the virtual world where avatars of real people live. Later, this concept was found in other science fiction novels, for example, in Prepare Player One by Ernest Cline (filmed in 2018 by Steven Spielberg).

The metaverse is a world in which virtual objects that do not exist in reality merge with completely physical things and events within a single platform, an ecosystem.

A simple example: in the form of your digital twin-avatar, together with other people, you will be transported into many different representations of the universe, filled, depending on the use case, with various services – from educational to entertainment.

Louis Rosenberg, a computer scientist and developer of the first functional AR system at the Air Force Research Laboratory, wrote an article in Big Think with a warning that the metaverse – the immersive world of VR and AR currently being developed by the company formerly known as Facebook – could create something like a real cyberpunk dystopia.

“I am concerned about the legitimate use of AR by powerful platform providers who will control the infrastructure,” Rosenberg wrote in his essay.

Among Rosenberg’s concerns is that third parties may introduce “paid filter layers” that will allow certain users to see specific tags on top of real people. These tags can, for example, hover over the head of each person and provide information about him.

“And they use this layer to tag people with bold blinking words like Alcoholic, Immigrant, Atheist, Racist, or even less vivid words like Democrat or Republican,” he said.

He is also concerned that the metaverse will “make reality disappear” by creating a system in which people cannot simply move away from their devices to communicate in the real world.

The idea is that the metaverse can grow to the point where it will affect almost every aspect of our lives, and for most it will be nearly impossible to simply move away from it.

This means that we will all be constantly exposed to any false reality that third parties want to show us, as AR will be superimposed on everything.

Rosenberg isn’t the only one worried. Ethan Zuckerman, director of the Digital Infrastructure Initiative at the University of Massachusetts, also recently wrote an article in The Atlantic condemning the ambitious Faceboo project … sorry Meta.