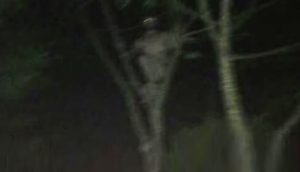 The mysterious images clearly depict a “cryptid” hiding in a tree and watching a tourist who left her tent at 3 am to investigate some strange sounds.

The creepy video allegedly shows a humanoid figure looking at a woman standing by a tent in the middle of the night.

In a video posted on YouTube by MrMBB333, a vaguely human figure appears to be lurking in a fork in a large tree.

A couple of bright spots are placed where the eyes should be, making people believe it is indeed some kind of animal or human.

This was recorded at a campsite in Edenbridge, Kent, at about 3 a.m. after the woman left the tent to investigate the strange noise and began taking random photographs with her flash to try and capture the creature in the dark.

The whole story and photo of the cryptid in the video below: