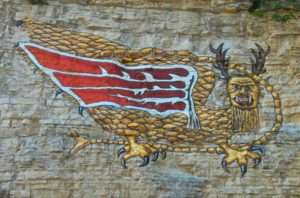 In 1673, Father Jacques Marquette saw the painting on a limestone bluff overlooking the Mississippi River. While skirting some rocks, which by his height, he saw upon one of them two painted monsters which at first made him afraid. The petroglyph was carved into the rock a half inch or more and was painted red, black, and blue.

“While skirting some rocks, which by their height and length inspired awe, we saw upon one of them two painted monsters which at first made us afraid, and upon which the boldest savages dare not long rest their eyes.

“They are as large as a calf; they have horns on their heads like those of a deer, a horrible look, red eyes, a beard like a tiger’s, a face somewhat like a man’s, a body covered with scales, and so long a tail that it winds all around the body, passing above the head and going back between the legs, ending in a fish’s tail.

“Green, red, and black are the three colors composing the picture. Moreover, these two monsters are so well painted that we cannot believe that any savage is their author; for good painters in France would find it difficult to reach that place conveniently to paint them. I could not believe they were drawn by the Indians, and for what purpose they were drawn seems to me a mystery.” 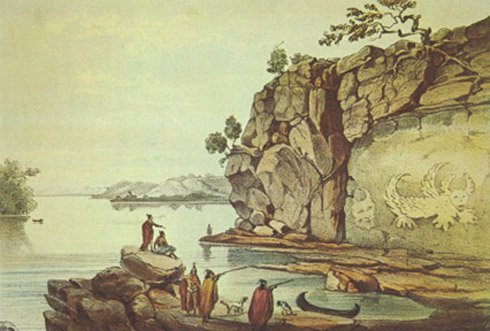 The monster depicted in the mural was first referred to as the “Piasa Bird”. There are rumors the Piasa may still be around, and these are yet to be confirmed.

The original Piasa illustration no longer exists; a newer version, based partly on 19th-century sketches and lithographs, has been placed on a bluff in Alton, Illinois, several hundred yards upstream from its origin.

The limestone rock quality on the new site is unsuited for holding an image, and the painting must be regularly restored. The original site of the painting was a high-quality layer of lithographic limestone, which was mostly quarried away in the late 1870s by the Mississippi Lime Company.

The ancient mural was created prior to the arrival of any European explorers in the region, and possibly before 1200 CE. It may have been an older iconograph from the large Mississippian culture city of Cahokia, which began developing about 900 CE.

The location of the image was at the river bluff “gate” to the American Bottoms valley, the site of Cahokia, the largest prehistoric city north of Mexico and a major chiefdom. Cahokia was at its peak about 1200 CE, with 20,000 to 30,000 residents.

Bird icons, such as falcons and bird men, were a common motif of the Cahokia culture. The Piasa may have been painted as a symbol to warn strangers’ traveling down the Mississippi River that they were entering Cahokia territory.

The Piasa bird was said to have been killed by the Illinois chief Ouatoga (with the help of twenty warriors) and commemorated in a petroglyph that existed in 1673 when Jacques Marquette and Louis Joliet visited the area.

According to the local legend, the Chief ordered his bravest warriors to hide near the entrance of the Piasa Bird’s cave, which Russell also claimed to have explored.

Outoga then acted as bait to lure the creature out into the open. As the monster flew down toward the Indian Chief, his warriors slew it with a volley of poisoned arrows. Russell claimed that the mural was painted by the Indians as a commemoration of this heroic event.

In 1924, Herbert Forcade painted his conception of the Piasa on the bluffs where a sand plant now operates on the 600 block of West Broadway, but the image was blasted away in the 1960s to make room for construction of the Great River Road.

A 3-ton metal replica of the Piasa was mounted on the bluffs near Norman’s Landing, 2 miles west of Alton, in 1983, but it was removed in 1995. The Piasa’s latest manifestation is a 48-foot x 22-foot painting on the bluffs completed by the American Legends Society and many volunteers in 1998. Piasa Park, opened in 2001, surrounds the painting and offers an interpretive center.

On April 24, 1948 a big bird that looked like a naval torpedo was seen flying at a height of 500 feet over Alton, Illinois, by E. M. Coleman and his son. They said the creature just like the legendary bird depicted in a petroglyph on a bluff by the Mississippi River in Illinois. Sightings continued over St. Louis, Missouri, during the following week.

Possible explanations proposed by Perry Armstrong, a surviving rhamphorynchid (a fossil flying reptile), Rhamphorynchus was a longtailed pterosaur that lived in Europe and Africa during the Late Jurassic, 150 million years ago.