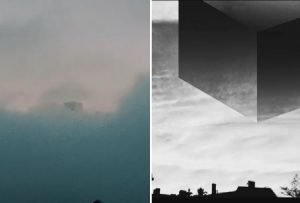 Former Lt. U.S. Navy and F/A-18F pilot Ryan Graves was the first actives duty pilot to publicly disclose regular sightings of an Unidentified Aerial Phenomenon (UAP) talks about his encounter with what he describes as a solid black cube inside a translucent sphere, reports ufosightingshotspot.blogspot.com.

He states that despite the wind was over 120-140mph the object was completely stationary in midair without moving a bit up and down, left or right as well as the object followed a so-called “racetrack” what means it was not flying a straight flight path but flew a random track where it made impossible maneuvers like a u-turn without slowing down.

After the F/A-18F got an upgraded radar system, the pilots saw these kinds of objects of unknown origin on a daily basis.

We can speculate whether these objects without wings or visible propulsion are man-made or of extraterrestrial origin, the fact is that these objects with exceptional abilities exist and move through our skies for whatever reason.

Not only Navy pilots, also commercial pilots have reported these extraordinary flying objects, like the pilot who captured a black cube at high altitude during a commercial flight, see video below.