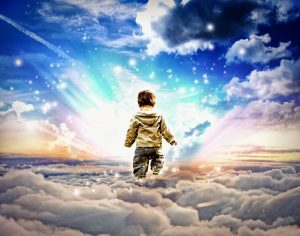 The mother of two-year-old Luke from Ohio, USA, claims that her child told her about his past life and scared her, reports Fox 2 Now.

According to Erica Ruehlman, the boy at some point began to behave very strangely: he began to worry about the safety of the house, and later began to call all the toys Pam, although they did not know women with that name.

“I asked him who is Pam? He turned to me and said, “Well, that was me.” I asked what this means.

He replied: “It used to be me, but I died, went up to heaven and saw God, and then God pushed me back down. When I woke up, I was already a baby, and you called me Luke,” Erica said.

The woman claims that she was very embarrassed, since they never talked about God and did not discuss the topics of life and death. Then she decided to ask how Pam died, to which she received the answer that the woman died in a fire.

At the same time, the child made a hand gesture explaining that Pam had jumped from the roof.

The mother claims that her son often provided other spine-chilling details including telling his family that he traveled on a train to Chicago, but the family, who live in Cincinnati, Ohio, had never been to the city.

Erica decided to find information about the fires in Chicago. She learned that in March 1993 the building of the Paxton Hotel was engulfed in a massive fire and most of the residents were locked up on the upper floors.

19 people died that day, including 30-year-old Pamela Robinson. Fleeing from the fire, she jumped off the roof.

The Ruehlman family was connected with the paranormal investigations TV show “The Ghost Inside My Child” whose producers also investigated Luke’s shocking claims.

A lot of photos of strangers were placed in front of the child, among which was a picture of Pam. The boy pointed to the photo of the deceased woman and said that he remembers when it was taken.

Erica began to inquire about Pam’s relatives and contacted her daughter. After the conversation, she found similarities between the deceased woman and her son.

“I know that Pam was a big fan of the American singer Stevie Wonder. Luke really likes this music,” says Erica.

According to the woman, Luke soon began to “let go” of Pam and had nothing more to say about her. Despite this, Erica believes that what happened should be shared with people.

“This story speaks of unity and love,” she says.

‘I died in Jerusalem in 1276’, Says Researcher Under Hypnosis