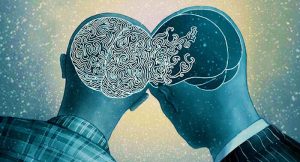 There are those who seem to feel more deeply for others, to the point of experiencing others emotions or sensations. Several theories exist regarding this.

Probably the most common type of naturally occurring ability to sense things related to others is intuitive empathy, also known as psychic empathy. While some are uncomfortable with the word psychic, it is simply used to refer to information that is hidden from what we consider our “normal” senses.

Yet often it could be considered a normal sense in itself. That is the case with intuitive or psychic empathy. This is when an individual shares the same emotions or sensations, such as pain, as another individual.

People often make fun of the husband who has sympathy pains. According to the Telegraph, father’s to be often experience, “cramps, back pain, mood swings, food cravings, morning sickness, extreme tiredness, depression, irritability, fainting and toothaches,” according to research. Some even begin to notice their stomachs swelling until they almost appear pregnant as well.

While the medical world has given it a formal diagnostic name, Couvade Syndrome, they admit to finding no medical cause for it. Some have called it psychosomatic in nature, not to mean these men aren’t actually experiencing these symptoms, only that there is no known medical cause or explanation for it despite the fact they are suffering from very real pregnancy signs, (Kiefer).

It appears that the most likely explanation is one that is often said in jest – “I feel your pain.” Only in such cases as these, people truly do feel another’s pain.

When they share a close bond and truly care for one another, the one not hurting would rather take on the pain if it meant relieving the one they love and while they can’t accomplish that, they do in fact experience similar symptoms. This is probably the most familiar case of intuitive empathy.

One explanation for why we seem experience the same emotions or feel the same sensations as others, was developed through the use of MRI techniques that discovered certain neurons that appear to account for some of these experiences referred to as mirror neurons.

These researchers use examples of why we wince when watching someone getting tackled in a football game or grimace when seeing someone carrying heavy boxes down the street. Our mirror neurons recognize the action and translate it as our own.

They purport that this ability is behind what allows us to develop empathy for others – the ability to view the world from another’s perspective. This makes it possible to actually feel sad for another’s loss or happy for another’s success when we see it on T.V. despite that we’ve never met them.

It’s our mirror neurons firing in response to our observations. When in the company of another person this allows us to relate to them, tune into what they’re feeling and form connections based on shared emotion. Essentially, we observe what others are feeling and doing and constantly imitate them, (Nova Science Now, 2005).

However, this fails to explain several things about empathy. When we experience true empathy we aren’t merely imitating another person’s feelings or sensations, we are actually experiencing them. A father to be can’t imitate his wife’s growing waistline and actually gain weight in the same area himself. Something else must account for this.

In addition, it doesn’t explain why mothers or children experience the sensation that something’s wrong with the other or feel joy and know the other has had something good happen in their life, even when long distances apart.

Others have reported that a wife can experience joy at home when her husband learns he’s received a bonus at work. Even though she doesn’t know the exact cause of her happiness, she does know it is related to her husband, (Wilkins, R.,). Yet, in cases such as these, there is nothing to observe, nothing to imitate.

While there’s no absolute answer to how these experiences occur, some have suggested that some are what is termed emotional empaths. These are individuals who are extremely sensitive to others emotions and physical states, such that they truly do experience them in a way much the same as the individual themselves.

Empaths can be more or less sensitive to the emotions and physical states of those around them such that each empath is affected differently. Some may experience physical symptoms of another without actually having the illness itself and others may experience the emotion of a loved one thousands of miles away, (Orloff, J., 2010, Sept. 10).

While many say everyone has experiences like these at some point in their lives, such as the expectant father, others such as Dr. Judith Orloff refers to it as one of four “emotional types.” She defines this as the filter through which you see the world and defines how you relate to others.

In addition to the empathy, she defines the intellectual who thinks everything through and analyzes the world relating to others through rational thought, instead of noticing how others make them feel.

For example, the rock who is steady, stable and reliable, who you can express your emotions to and trust that they won’t judge you, yet who also have difficulty expressing their own emotions, and the gusher who are very attuned to their own emotions and love to share them, yet may share too much, leaving others feeling burned out after interacting with them.

Dr. Orloff defines the empathic style as referring to those who are “highly sensitive, loving, and supportive. They are highly tuned instruments when it comes to emotions and tend to feel everything, sometimes to an extreme,” (Orloff, 2011).

Regardless of what explanation is given, even if none is given at all, there is a wide variety of evidence and reports from numerous sources describing individuals who feel others emotions and physical sensations, those that are both positive and negative, to dismiss the phenomenon as non-existent.

The basic quality of empathy, viewed as the ability to see things from another’s perspective, is a human characteristic that develops as children grow older and can see things through others eyes.

It is this very quality that allows human relationships to be established and strong bonds and connections to form between people. Is it impossible that there are those that are capable of taking this quality a step further?

Our World is a “Matrix”. But not Digital, Scientists Says