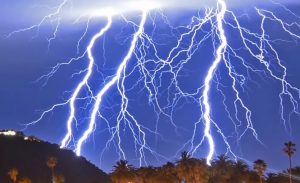 Some parts of Southern California were hit hard by lightning earlier this week. The breathtaking storm produced a positive apocalyptic display over Los Angeles, recording over a single five – minute period of over 1,500 individual lightning strikes off the coast.

All those who observed the storm didn’t waste time getting out their phones and uploading the lightning strikes photographs and video footage to social media.

A weather system known as an “atmospheric river” was responsible for the extreme lightning and heavy rain across the region, according to the office of the National Weather Service in Los Angeles.

“Atmospheric rivers are relatively long, narrow regions in the atmosphere – like rivers in the sky – that transport most of the water vapor outside of the tropics,” the National Oceanic and Atmospheric Administration (NOAA) explains on its website.

“These columns of vapor move with the weather, carrying an amount of water vapor roughly equivalent to the average flow of water at the mouth of the Mississippi River. When the atmospheric rivers make landfall, they often release this water vapor in the form of rain or snow.”

You can see some lightning video clips from across the state in the news report below.