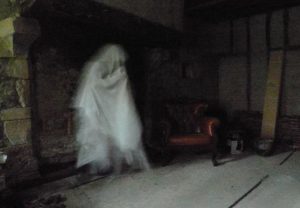 Visiting your web site by pure accident, I find compelled to share one of many of my ghostly experiences.

The challenge is trying to keep what I have to say short. I suppose like any story you must begin at the beginning.

You see approximately eleven years ago, my brother/best friend was electrocuted.

He had one child and another had just been born. I received the call that sends chills through your body. Before even picking up the phone I felt a little odd but couldn’t identify the problem. The words from the other end of the line spoke but I became deaf.

Arriving at the funeral home we all cried, hugged and regrettable buried him. The sudden nature of the incident caught us all off guard and we spent the entire day, repeating the words, why.

Night fell and as the sounds of pain, disbelief and angry began to fade into the darkness, a thick fog quietly oozed it’s way around the house.

Drifting off into a deep sleep, I began to see my brother and all the good times we had. Suddenly, I felt a sharp pain in my side. It was my wife, looking terrified and pointing to the end of the bed.

My brother was standing at the foot of the bed, waving good-bye. Now I would have dismissed this as awaking from a dream state, wishing to say the things I hadn’t said. If it weren’t for the fact, that my wife had awaken me and had seen the same thing.

The next morning, sitting at the breakfast table I remained silent. I guess maybe afraid someone would think I was insane. Out of the blue, my other brother began to recount his visit.

Then one by one the entire house began to describe what had happened to them. My brother you see always put others ahead of himself and the entire family agreed that this was his way of putting us at ease.

The story does not end here, in fact it wasn’t until about year ago, that with the help of a Buddhist monk that I was finally able to sleep the entire night through.

It wasn’t that he haunted me, it was more like a guardian angel. He would come to me and advice me of the direction I should be going in. Yes, I thought at times I was going insane.

The really odd thing is that the ceremony performed by the Buddhist monk produced a large lump on my side, which they forced out of my body.

Once the lump was gone my brother stopped visiting. I still think of him often but it doesn’t keep me up at night.

I only know that I saw what I saw and felt what I felt.